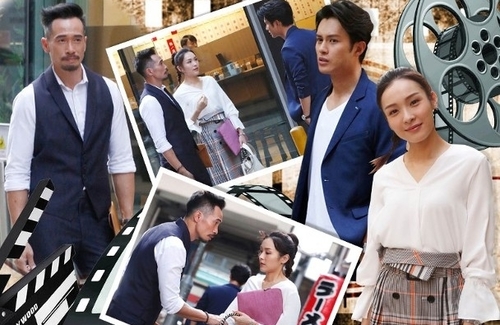 In TVB’s new drama Amelia’s Rhapsody <愛美麗狂想曲>, Matthew Ho (何廣沛), Ali Lee (李佳芯), and Moses Chan (陳豪) are involved in a love triangle. The trio recently shot outdoors in Causeway Bay, attracting a large number of onlookers who went crazy over Moses. Known for being a wonderful husband and father, Moses has become the idol of many women, so even Matthew, who plays a rich second generation in the series had to surrender to him.

In the drama, Matthew plays a younger man who is in a relationship with the older Ali. Unfortunately, due to bad timing, the couple ends up separating. Since the breakup scene hasn’t been shot yet, Matthew is nervous that he would burst out in tears. He said, “The scene shows that I’m united with Ali on the outside, but divided on the side because Ali has feelings for Moses. I compete with Moses but end up retreating because he is too strong. The director wants tears in my eyes to create a beautiful shot, but I’m scared I’ll start to cry!”

Perhaps, it’s because he finds that the storyline relatable since he’s dating someone older than him in reality – the 32-year-old Rebecca Zhu (朱晨麗). On dating someone older, Matthew expressed, “If the age difference isn’t a lot, then it’s not a big deal. It would be awkward if there was a gap of more than 10 years!”

Aside from a rich romantic plot, the drama has a crazy storyline that exceeds reality. Ali said it requires a lot of physical strength to film since she has to fight monsters and transcend heaven and the sea. “There’s no time to sleep, so my body will be weaker,” Ali shared. “I will pay attention to my diet – taking care of my health is important!”