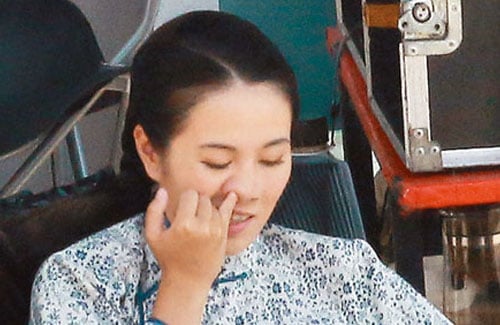 Michelle Ye (葉璇) is losing her manners on the set of Azalea <映山紅>, her latest self-produced television drama. Photos of an unladylike Michelle picking her nose headlined tabloids yesterday, as she acted uninhibitedly without sensing the paparazzi’s presence.

On May 1, a traditionally-dressed Michelle arrived on the set of her latest television drama Azalea, looking prepared for an entire day of filming ahead. Azalea is Michelle’s latest self-produced drama, a romantic epic set in the late 1920s in Mainland China. Michelle stars in the series; the rest of the cast includes Huang Xiaolei (黄小蕾), Tian Hairong (田海蓉), and Monica Mok (莫小棋).

Since leaving TVB to film movies and Mainland dramas, Michelle’s status in the industry has tripled, becoming not only one of the most popular leading actresses of the nation, but also one of the country’s most popular television drama producers. However, despite her dignified image, Michelle lost some of that armor of perfection on the set of Azalea at Hengdian World Studios yesterday.

Michelle was seen picking her nose during the entire time she was reading her script. Allegedly, she did not wash her hand before touching a male actor’s hand. Although she was surrounded by crew members, she stuck her hand inside her pants to scratch herself. She also appeared to be very close with various male staff.

Azalea has been in production since March 2014 and is slated for 30 episodes.