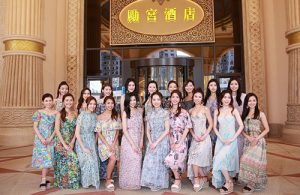 A few days ago, the 19 contestants for the upcoming 2018 Miss Hong Kong Pageant traveled to Macau to film a series of promotional videos. #2 Kathy Chong (庄嘉慧) was absent due to illness. Filming spots included Macau’s Fisherman’s Wharf, the iconic Ruins of St. Paul, the Kun Iam Statue, and the A-Ma Temple. It was a time-efficient shoot—the locations were close together, and after a whirlwind shoot, the contestants returned to Hong Kong for another filming project.

In related news, the upcoming Miss Asia Pageant, which will be broadcasted online, has opened up auditions. Contestants for Miss Asia this year will travel to Korea to receive dance and model training from a Korean entertainment company. They will then travel to China for additional training.

As for comparisons with TVB’s Miss Hong Kong, former ATV executive Ho Lai-chuen (何麗全) said 2018 will be Miss Asia’s 30th year, so the goal of the competition would focus less on glamorous overseas shoots, and more on the contestants themselves.