In the past 23 years, the Miss Hong Kong crown has been sponsored by LukFook Jewellery and are hand made with many diamonds. The crown became not only an important memento for the winner, but also an item of great monetary value. Since the vendor decided to drop sponsorship for this year’s pageant, winner Lisa Tse‘s (謝嘉怡) crown is not worth the millions that her predecessors’ tiaras were valued at.

Miss Hong Kong 1995 Winnie Yeung (楊婉儀) was the first winner to receive a real diamond crown, which is estimated to be worth over 10 million Hong Kong dollars. Unfortunately, two years ago she and her husband were embroiled in multiple lawsuits from creditors over their failed tutoring business, and she had allegedly used her crown as loan collateral. 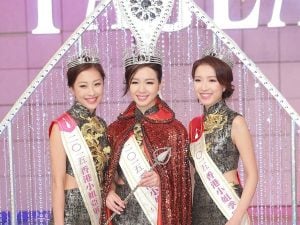 While not as valuable as the Miss Hong Kong tiaras in the 1990s, 2015 winner Louisa Mak’s (麥明詩) crown was handmade with over 880 diamonds weighing at over 30 carats. The centerpiece diamond in the middle of the crown can be removed to turn into a diamond pendant suitable for many different occasions. The crown is valued at over HK$4.28 million. The design is very similar for 2016’s winner Crystal Fung’s (馮盈盈) crown.

All winners of the pageant are able to wear their crown to events during their reign and are also able to keep their crown as a personal keepsake. Miss Hong Kong 2008 first runner-up Skye Chan (陳倩揚) wore her crown for her engagement photoshoot. Miss Hong Kong 2005 Tracy Ip (葉翠翠) and 2012 winner Carat Cheung (張名雅) both wore their crown on their wedding days . Natalie Ng (吳文忻), who was the second runner-up in 1998, made her daughter’s dream of being a princess come true as she allowed her to wear her crown during her birthday party.

Unfortunately, this year TVB was unable to secure a diamond sponsor for the crown, thus the ones given out this year are just props. In the 1980s, the Miss Hong Kong pageant did not have jewelry sponsors either, as 1985 winner Charlene Tse (謝寧) confirmed that her crown was a prop, but its value is not in the crown itself but in the honor, social status, and memories brought by the pageant.

As the last Miss Hong Kong to receive the invaluable diamond-studded crown, Carmaney Wong (黃嘉雯) wore her crown to the pageant and felt that the headpiece’s importance is not in its monetary value, but the meaning behind it.