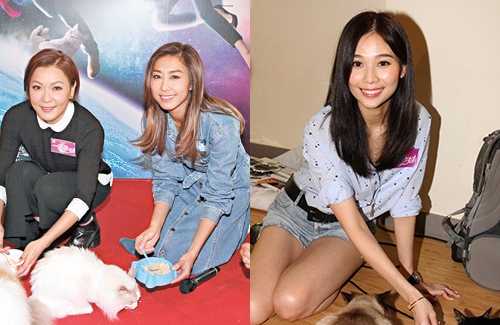 Moses Chan (陳豪), who was spotted at the Hong Kong International Airport with wife Aimee Chan (陳茵媺) last Thursday, just came back from their trip to Italy. A few days ago, Moses made his first appearance since his return to promote his drama My Lover from the Planet Meow <來自喵喵星的妳>, which is currently airing on TVB Jade.

The 45-year-old father of three shared with the reporters that he and Aimee had just returned from a five-day trip to Italy, where they visited Venice and Milan. He said the trip was planned over a year ago, but because they had to take care of their children, they didn’t have the time to go.

The organizers of the promotional event brought along a few domestic cats so the cast could interact with them. Kristal has a pet cat of her own, called Momo, who enjoys watching Kristal on television. Kristal added with alaugh, “And Momo would actually leave during the commercial breaks!” Kristal shared that she and her husband, Chapman To (杜汶澤), will take a trip to see the Northern Lights after she completes the filming of her current series, Time-Traveling Officials <超時空男臣>.

A few days ago, a scene that involved in Vivien Yeo, Kristal Tin, and Nancy Wu doing yoga together garnered laughs and praises from the show’s viewers. Vivien is also getting Best Supporting Actress buzz for her performance in the scene.

“I spent two weeks practicing just for that scene,” said Vivien. “Although I did strike most of those yoga poses, there were a few that was too difficult for me to do. My head was keyed into the stunt actor in post-production.”

Vivien thanked the viewers for their support and asked them to pay the other scenes on the show with special attention too.