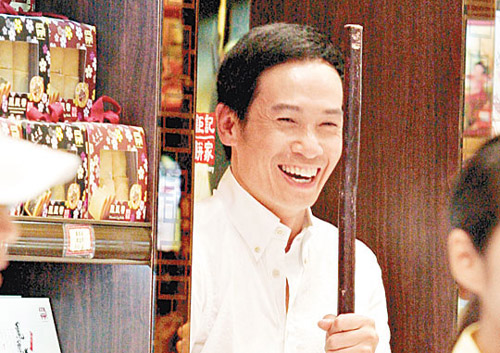 Moses Chan (陳豪) who has recently been busy filming TVB drama, 4 In Love, was filming in Mongkok last night with Cheung Kwok Keung (張國強) and Lee Yee Man (李綺雯). From the shooting scene, Cheung Kwok Keung (KK) who was in a monk look, went to a chinese biscuit shop to pick and buy some souvenirs. Lee Yee Man who was acting as a shop employee, was responsible for attending to customers. Within a short time, KK’s character bought a huge bag of “battle goods.” Just as KK’s character turned and was preparing to leave, he suddenly saw Moses through the door and immediately ran out of the store to give chase.

When there wasn’t a need to get in position for filming, Moses Chan returned back to within the shop to mingle and chit chat with everyone as well as to enjoy the air-conditioner. In the meantime, while the director was filming a close-up shot of KK, Moses took KK’s long wooden stick and played around with it.

Although it was already dawn at that time, the scene still attracted quite a lot of passers-by who crowded around to watch. When the drama crew were resting in the middle of filming, many of the biscuit shop employees rushed forward to snap a photo with Moses. Moses then acceded to all the requests, clearly implementing a “close to civilians” approach.

Note: Cheung Kwok Keung has acted in When Easternly  Showers Fall on The Sunny West <東山飄雨西關晴> as Tsui Yiu Chung and in OL Supreme <女王办公室> as Susan, both opposite Liza Wang (汪明荃). He has also acted in You’re Hired <絕代商驕> as Martin, opposite Charmaine Sheh (佘詩曼) and Dayo Wong (黃子華).