Anniversary Drama “My Lover from the Planet Meow” Premieres October 17 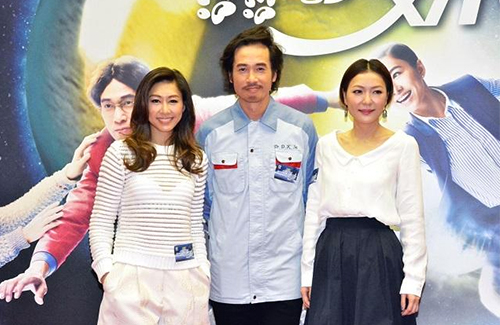 Last year’s Ghost of Relativity, a story about an office worker haunted by a female ghost, brought forth Kristal and Nancy’s “god-like synchronization” to television. While viewers may not get to see that same in-sync performance in Planet Meow, Kristal and Nancy showed their strong chemistry at yesterday’s promo event, where they both teased Moses for being indecisive—the cast were doing a science experiment involving a water balloon, and Moses was to choose either Kristal and Nancy to wear the rain coat. When Moses told Kristal and Nancy to choose, they both said, “You’re the one who is supposed to choose!”

In regards to their “synchronizing” chemistry on the new show, Nancy said, “Kristal and I don’t have as many scenes together in this show as in the last one. We each share more scenes with Moses. However, there was one catwalk scene we did together, and we were pretty synchronized.”

Moses shared that he was invited to record the rap for Planet Meow’s theme song. It took him less than twenty minutes to finish the recording. He also said he has confidence in the ratings, and believes that viewers will find the show entertaining.

There’s been talk among gossip circles that Moses and his wife Aimee Chan (陳茵媺) are preparing for a fourth baby. Moses immediately denied the rumor and said, “Three’s enough! It’s been very busy. 24 hours in a day is seriously not enough.”

My Lover from the Planet Meow will premiere on October 17, 2016.

“My Lover from the Planet Meow” Teaser