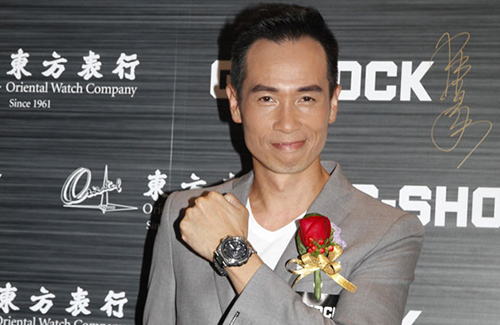 Currently filming Chapman To’s (杜汶澤) new movie in Malaysia, local media reported that Aimee Chan (陳茵媺) has quietly ended her management relationship with TVB over two months ago. This led to speculation that her husband Moses Chan (陳豪) will soon follow suit and leave the station, but the 44-year-old actor dispelled these rumors at a event held yesterday, exclaiming that he still has a long way to go before his TVB contract ends.

Moses took some time off his filming schedule to attend an event for a watch brand earlier this weekend. The actor shared that it has been a while since he’s last seen Aimee, who will be filming in Malaysia for another month. The couple contact each other everyday via video chat.

“She really misses the kids and she has to see them at least once a day,” said Moses. “She really wants to be back as soon as possible.”

Asking if his two boys, Aiden and Nathan, missed their mother, Moses admitted, “Very much so, but I can handle it. Aimee also misses the kids; the reason why it took her this long to make a comeback is because she didn’t want to leave them.”

Moses supports Aimee’s decision to make a comeback in acting, but he believes that Aimee would prefer to stay with the kids more. Mentioning that Chinese entertainment company LeTV will soon start the production of its first drama series, Moses said, “I’ve heard about it. As an actor, I would love for a chance to collaborate. I don’t need to leave [TVB] to do that. I cannot say that money is not important, but I am more interested in better future developments and opportunities.”

After reports of Aimee’s departure came to light, rumors about Moses leaving soon followed. It is said that he only has one year left in his TVB contract. Moses denied this. “That’s not true.”

Has Moses recently renewed his contract? “No. My contract length is pretty long, but it’s the form of collaboration that is more important. The length doesn’t matter.” Moses declined to reveal the actual length of his TVB contract, explaining that it is a private matter.

Will Moses convince Aimee to renew her contract with TVB? “That’s hard to answer. As a father, I really want my kids’ mother to spend more time with them, but as her fan, I want Aimee to do more acting. We need to find a balance.”