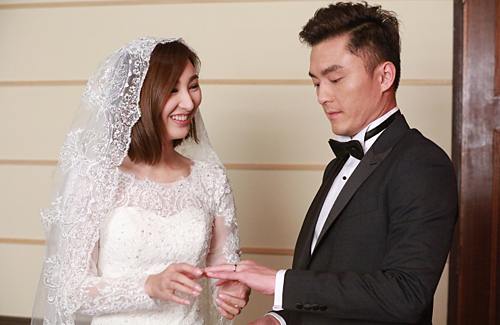 My Commissioned Lover <婚姻合伙人> is currently broadcasting and has brought back nostalgic feelings of TVB small-budget dramas. It has been at least half a year since TVB has broadcast modern dramas that were not imported or collaborations with China. The last one in this genre was probably Who Wants a Baby? <BB來了>.

These small-budget, modern dramas are TVB’s bread and butter and usually have very strong roots in everyday Hong Kong life leading to success at home but rarely in China. Due to the current lack of these dramas, Come Home Love: Lo and Behold <愛 · 回家之開心速遞> has been filling in the gap and a consistent ratings winner.

My Commissioned Lover revolves around Samantha Ko (高海寧) and Mat Yeung’s (楊明) love story. The first episode takes a step back into the past spanning from 2008-2011; it talks about Mat’s start as a lazy construction worker who is motivated to change once he meets real estate agent Samantha. He falls in love with her and is at her beck and call. He later invites Samantha to join his mother’s real estate company as a shareholder. Fast forward to 2011, they work as partners at his mother’s real estate company and the relationship still has not come to fruition.

Based on the clips from the theme song, there are some spoilers that show Mat and Samantha getting married and having a five-year-old daughter, Mat going to jail, and Kenny Wong (黃德斌) coming between them. In 2017, their relationship breaks apart and they fight for custody of their daughter.

Ultimately, this is not a drama about the real estate profession but about the course of a marriage and the materialistic values of Samantha’s character. The story spans over seven years and seems to be the basis for a long drama, however everything will be fit into 20 episodes which is a new innovation.

Maybe due to this, the drama was not immediately broadcast after filming as TVB felt that the audience may not be able to accept new ideas. The drama was filmed in 2017 by Poon Ka Tak (潘嘉德) who has since left TVB. It was in line to be broadcast but was always pulled out at the end. If it were not for Jacqueline Wong‘s (黃心穎) scandal which led to TVB’s change in broadcasting lineup, this drama most likely would have never aired.

This is the first time Mat and Samantha have had leading roles. Samantha’s role as a materialistic Hong Kong girl is nothing new and she seems to be typecast into this stereotype. However, Mat’s role as an arrogant, smooth talker is a refreshing change!