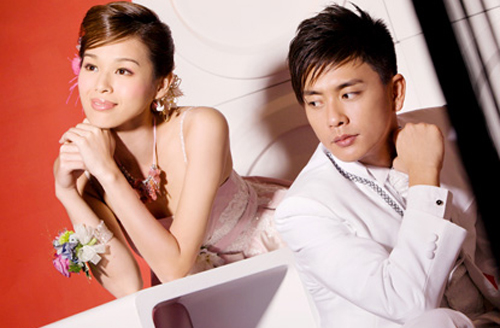 Bosco Wong (黃宗澤) announced that he and Myolie Wu (胡杏兒)  have ended their 8-year relationship! In a Commercial Radio interview with Eileen Cha (查小欣), Bosco’s voice was emotional as he made the shocking announcement that he and Myolie have parted ways peacefully. Bosco cried over the breakup and became depressed over the last several months, trying to salvage the relationship unsuccessfully.

Bosco indicated that since last year, their relationship was marred by problems, in which the pair tried to mend their relationship unsuccessfully. He stated several times that there was no third party involvement, but due to irreconcilable differences, they chose to put behind their love and remain as friends instead. He stated, “Sometimes when the feelings are gone, they are gone.”

A recent East Weekly report claimed that Bosco Wong had 3 girlfriends over the last 6 months, linking him with his female Mainland China costars. Bosco replied, “This is definitely not the case! Right now, I have not seen that report yet. I have only seen the news abstract sent from Ms. Lok (Virginia Lok).”

Bosco admitted that he had chatted with Ms. Lok last night about his depression over the breakup. “We have been together for such a long time, there will be of course unhappiness. It does not matter what they write; it is between two people and not a third party. I am used to other people writing such slander. I wish to state that it is not real, as I only filmed with her (Mainland actress) for two days.” Asked why he did not deny the news, he said that he did not feel the need to do so.

Bosco Cried and Tried to Save Relationship

Bosco declined to answer who asked for the breakup first. He stated that it was a mutual decision and there was no specific reason. However, as the radio interview with Eileen Cha progressed, it was revealed that Myolie had asked for the breakup, while Bosco tried to salvage it. The breakup had occurred several months ago, before he headed to China to film The Woman Above the Bread Tree (面包树上的女人) .

Bosco was known to be generous with Myolie with his money, paying the down payment for her Audi car earlier. Asked whether he had considered Myolie to be a life-long partner, Bosco said, “You can say that.”

Asked whether Bosco had tried to repair the relationship and change Myolie’s mind, he replied, “Yes, I did.” Asked what was Myolie’s reaction, Bosco said, “We are mature individuals, so we discussed it and did not argue.” Coming to this stage, did he think that he will be able to pursue Myolie once again? Bosco said, “It will depend on fate, which is destined. You cannot change it. I have tried my best already.”

Bosco and Myolie’s breakup allegedly occurred several months ago, before he headed to Mainland China to film The Woman Above the Bread Tree. Bosco said he has been very unhappy and hid himself away. He thanked his friends for flying to China to comfort him, in which he cried for several days.

Eileen Cha pressed further in her interview, “Why did you hide yourself away, were you thinking of methods? This incident advanced to this stage, did you ask why?” Bosco replied, “Maybe my personality is hard to withstand. For real, it may be very hard to withstand!”

Will Continue to Protect Myolie

Bosco stated that he will continue to protect Myolie. “There is nothing a man cannot persevere. If there is anything, please come to me and do not bother Myolie.”

Bosco praised his ex-girlfriend, “She is a wonderful woman.” He stated that he is still friends with Myolie, maintaining text message contact with each other.

In today’s upcoming press conference for Ghetto Justice 2 <怒火街頭2>, Myolie will speak in greater detail as to why she broke up with Bosco. TVB executive, Virginia Lok (樂易玲), has also confirmed the breakup news to be true.

In her Best Actress acceptance speech at the 2011 TVB Anniversary Awards, Myolie publicly acknowledged her love for Bosco.  Yet, in the same speech, Myolie hinted that her relationship with Bosco was far from perfect. She proclaimed that he was often difficult to withstand in the relationship, as she also had her own difficult moments.

Bosco is currently in Mainland China filming The Woman Above the Bread Tree (面包树上的女人). In a recent interview, Bosco mentioned that Myolie found him to be a boring boyfriend, and often chided him to open up more and talk with her. Bosco claimed that he was a quiet and sometimes slightly depressive person in real life.

Since Myolie and Bosco spent a large amount of time apart from each other, filming alternately in Mainland China over the last twelve months, this may have compounded their rift as well.

This article was updated on July 25, 2012 at 1:33 AM to reflect the contents of Bosco Wong’s interview with Eileen Cha at Commercial Radio regarding critical details of his breakup with Myolie Wu.

Jayne: OMG! This is my worst nightmare come true! Ever since I watched War of In-Laws, Bosco and Myolie have been my favorite TVB couple. For years, they teased us that they may be secretly dating, but we did not know for certain. When they increasingly opened up, I was delighted. Myolie has spoken at length about how Bosco changed her life. I really thought that they will be life partners and they will get married and have kids together one day!

As Myolie’s career expanded in Mainland China, they likely spent an unhealthy length of time apart. Now Bosco is in Mainland and how much quality couple time did they have over the last 12 months?

Did she also wish to get married and he had cold feet? That is usually a relationship breaker, when a couple cannot agreed on the future together.