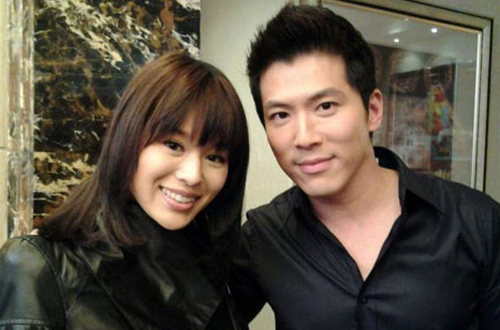 Earlier this week, Ming Pao Weekly published a report claiming that Myolie Wu (胡杏兒) decided to break up with Bosco Wong (黃宗澤) because she fell in love with Taiwanese actor, Eric Huang (黃少祺). Myolie and Eric filmed mainland drama, Jin Yu Man Tang <金玉滿堂>, together earlier this year. Myolie shot down allegations that she fell for another man, stating, “Do not drag innocent people into this!”

Forty-one-year-old Eric Huang was considered to be a “diamond bachelor” due to his healthy lifestyle and status as Taiwan Television’s (TTV) “Big Brother.” While filming Jin Yu Man Tang, Myolie and Eric had gone out to dinner with the production crew. After their March dinner gather, Eric posted a photo of Myolie and himself with their heads together. He wrote on his blog, “This moment will become one of my unforgettable memories in life!”

Myolie Wu: “Do Not Drag Innocent People Into This!”

Amidst speculations that she was disloyal in love, Myolie responded, “Anyhow, I do not have a third party! I truly hope that there will not be too many speculations, dragging in innocent people. It is enough that the two of us [indicating Bosco and herself] understand the reasons behind [the breakup].

Currently filming The Woman Above the Bread Tree <麵包樹上的女人> in Taiwan, Bosco was asked whether Eric Huang was the rumored third party. Bosco replied, “I will not respond. Thank you!”  Although accused that his infidelity had led to the breakup, Bosco’s three mainland costars clarified that they were never involved with him.

Regarding allegations that Eric Huang was the instigator leading to Myolie and Bosco’s breakup, Eric’s manager stated, “This should not be the truth. I have visited the filming set; my impression is that Myolie and Eric were only good friends that enjoy talking with each other, instead of romantic sparks.”

However, Eric’s manager did not wish to clarify whether Eric was currently dating. “It is inconvenient to discuss personal matters. But we will not intrude upon others’ relationships, which is not a good thing.”