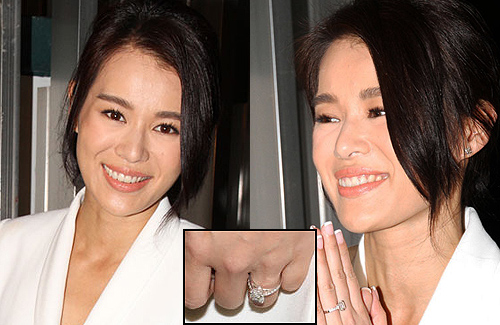 Wedding bells are around the corner for Myolie Wu (胡杏兒) and entrepreneur Philip Lee! Celebrating her 36th birthday tonight, Myolie is expected to announce her engagement to friends. Spotted entering a party venue in Central, Myolie declined to speak with reporters. But she flashed a brilliant smile and did not try to hide the large diamond ring on her ring finger

Getting Married in December?

Earlier this week, reports surfaced that the couple will be tying the knot in Hong Kong next month. In contrast to prior belief that the wedding will take place in England, the couple is now instead holding their wedding in Hong Kong to accommodate friends and family.

Furthermore, since Philip is the eldest son from a traditional Hakka family, the couple will be required to perform ceremony rituals at the village in which Philip was born. To appease her future in-laws, Myolie has reportedly given up on her dreams for a fairytale wedding in England to hold the wedding in Hong Kong instead.

With Myolie turning 36 years old today, Philip has reportedly invited many of the couple’s good friends and will be throwing a combined birthday and engagement party.

Attending Myolie’s birthday party tonight, Linda Chung (鍾嘉欣), Kelly Fu (傅嘉莉), Adrian Chau (周志文), and Daniel Chau (周志康) declined to speak with the press. However, Elaine Yiu (姚子羚) hinted, “There should be good news after tonight is over! I’ll let the two of them share the good news themselves!” Elaine also added that for the wedding, Myolie will likely wear a gown from her own wedding studio.