Myolie Wu Flying to Hainan Next Week; Fate With Bosco Wong Over? 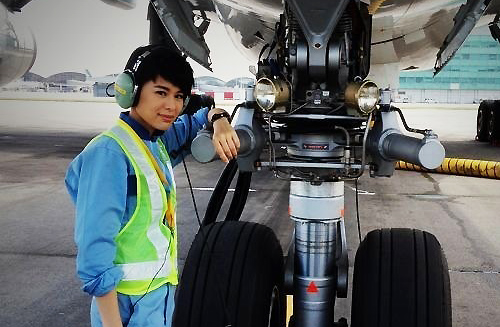 Since announcing their breakup in July,  Myolie Wu (胡杏兒) and Bosco Wong’s (黃宗澤) work schedules did not allow them to see each other. After working in Taiwan and Japan for the last month, Bosco has finally returned to  Hong Kong. Yet, Myolie will be flying to Hainan, China next week to film for Triumph in the Skies 2 <衝上雲霄2>.

Determined to have a clear break, Myolie admitted earlier that she has purchased her own condo apartment and will soon move out of Bosco’s residential building. Ending even their neighbor relations, the only other way to see each other will be at TVB City.

Yesterday, Myolie ate lunch at the TVB cafeteria and headed out to film on location scenes for Triumph in the Skies 2. Half an hour later, Bosco returned to the studio to film for A Good Heart Goes Haywire <好心作怪>. Despite filming the drama for more than a week, the ex-lovers have not met at TVB City yet.

Not seeing each other for a lengthy period of time, Myolie was asked whether she had missed Bosco. Responding awkwardly, Myolie said, “This is a difficult question to answer. The company is so big; if we were to see each other, then we see each other.”

Myolie Filming in Hainan Next Week

The cast of Triumph in the Skies 2 will film in Hainan next week. Myolie revealed, “We will primarily film romantic scenes while in Hainan. I will not be wearing a bikini, since my character is tomboyish in nature. There will be other bikini wearers, such as Eliza Sam (岑麗香) and Kibby Lau (劉俐).”

Myolie’s Triumph in the Skies 2 costar, Francis Ng (吳鎮宇), was rumored to have rigorous requirements on set. Myolie indicated that she did not feel pressured working opposite Francis. “Everyone wants the script to turn out well. I have learned a lot from Francis. To-date, he has not scolded me. He is okay to get along with; actually he’s quite humorous.”

Bosco Denies Rejecting “Triumph in the Skies 2” Due to Breakup

Busily filming A Good Heart Goes Haywire, Bosco was asked whether he had missed Myolie. He said, “I will fully focus on work right now. I will not feel awkward if we were to see each other. I will greet her, since we are friends.”

Rumors circulated that Bosco had rejected filming Triumph in the Skies 2 to avoid post-breakup awkwardness in working with Myolie. Bosco clarified that he had committed to filming A Good Heart Gone Haywire at the beginning of the year, but did not mind guest starring in Triumph in the Skies 2 if the producer requests his appearance.

Jayne: Separated long distance once again, when will Boscolie see each other? After filming in Hainan, the Triumph in the Skies 2 cast will be escorted to Europe to film there soon.

Bosco’s responses recently seems to have toned down, regarding his eagerness to reconcile. Or is he keeping his intentions to himself only?

43 comments to Myolie Wu Flying to Hainan Next Week; Fate With Bosco Wong Over?