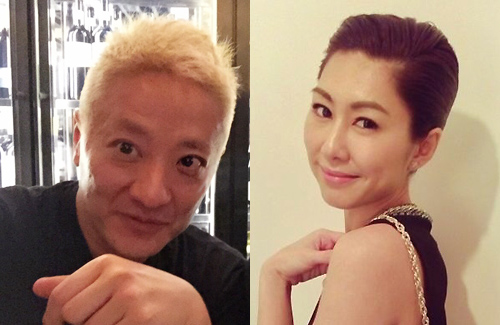 After separating from advertising entrepreneur Patt Shum (沈栢淳) last November, Nancy Wu (胡定欣) was reportedly so devastated that she needed a holiday in New York to heal from the breakup. However, Nancy appears to have moved on far more quickly than expected, as she may have fallen for 46-year-old music producer Terry Chan (陈明道).

The two were photographed attending a musical together, arms around each other on the streets, and returned to Nancy’s apartment. Terry did not leave until the next morning.

Terry was spotted effortlessly entering the security code to Nancy’s apartment, a sign which suggests that he man often spent time at her place. Terry was also very chummy with Nancy’s good friends, indicating that he had already won over them.

While a relative unknown to the public, Terry is actually a seasoned and extremely accomplished music producer, who has worked with the likes of Faye Wong (王菲), Kelly Chan (陈慧琳), and Joey Yung (容祖儿). Rumor has it that Terry met Nancy on set while managing the live sound for an episode of Sze U Tonight <今晚睇李>, and managed to overcome the significant age gap by impressing Nancy with fine dining and fancy cars.

When interviewed over the telephone, Terry admitted candidly that he had visited Nancy at her home, had meals with her, and also cooked for her. However, he made no mention of whether they were dating.

As for Nancy, she expressed that she was merely friends with Terry, who treated her well and was sweet to her. However, Nancy did not expressly deny the allegations that Terry was pursuing her.

This article is written Jingles for JayneStars.com.