Baring an actor’s skin is an increasingly common way for dramas and movies to draw in viewers nowadays, and this is especially true for Korean productions. It often causes heated discussions and high ratings. Thus, it came as no surprise when actor Song Weilong (宋威龙) hopped onto the growing trend and went topless in a recently aired episode of the popular Chinese drama, Find Yourself <下一站幸福>. However, instead of receiving compliments, many viewers criticized the male lead’s lean figure.

Find Yourself tells the story of an older woman falling in love with a man 10 years younger than her. Established career woman He Fan Xing, portrayed by Victoria Song (宋茜), begins having an underground relationship with the office intern, Yuan Song, played by Weilong. So far, the audience has been resonating with the storyline, landing the drama on the list of trending searches almost every day. 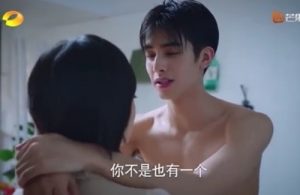 Each episode spurs a lot of discussion among viewers, including a recently aired episode, in which Weilong went topless. In that scene, Victoria follows Weilong back to his house, where they are going to have a party. To present the best side of himself, Weilong takes a shower. Midway through showering, he asks Victoria to bring him a towel. After completing the task, Victoria stays outside by the bathroom. At this moment, Weilong walks out of the bathroom with only a towel wrapped around his lower body.

Despite his pretty face, Weilong’s figure is on the skinnier side, which made the whole scene very unromantic and left netizens displeased. Viewers left messages on Weibo like “There is no temptation,” “Too thin,” and “Not finished with puberty.”

However, Weilong is not the first male star to be criticized by netizens for his figure. In the 2018 drama, Sweet Combat <甜蜜暴擊>, Lu Han, who barely shows off his skin, had a shower scene. His lack of muscles caused netizens to call him a white cut chicken with no manliness. Afterward, his slim figure was often criticized. 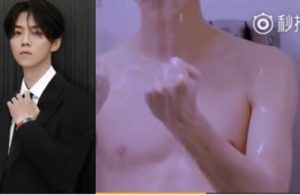 This time, Weilong experienced the same thing as Lu Han. It once again reminded actors that it’s necessary to have a toned figure before going topless on screen.

Also, many netizens are comparing Find Yourself to the Korean drama, Something in the Rain <經常請吃飯的漂亮姐姐>, for its older woman-younger man romance. Everyone complained that Find Yourself is too fast-paced, and the heroine’s personality is very cold. Also, the lack of emotions between the main characters creates a distant feeling between the romantic leads.

On the contrary, people said Something in the Rain was almost perfect. Although it had a bad ending, the audience generally loves the drama.