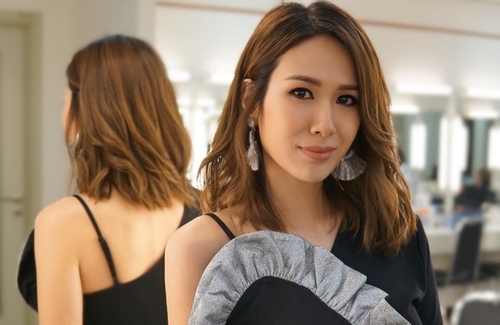 Mat Yeung‘s (楊明) girlfriend Lisa Chong (莊思明) recently took to social media to complain about her in-flight experience with Cathay Pacific. Her friend arranged for her to sit in the airline’s economy class on a flight to Thailand, where she was going to attend a banquet. Midway through the flight, Lisa pressed the service button several times for the crew’s assistance, but she was blatantly ignored. Convinced that a flight attendant deliberately ignored her, the actress wrote out a long post on social media detailing the incident.

Lisa explained she pressed the service button once so she could borrow a pen to fill out the immigration form. However, she still did not receive any help after a long time. She noticed the light that turned on once the service button is pressed was off despite not receiving any help.

It happened two more times, but she deliberately turned around the third time to see if she could find out what was happening. “It turns out the stewardess behind me turned off the light, and she quickly turned around and walked away,” Lisa shared. “She did not serve me before she walked away. I didn’t even have time to get her attention!”

Dissatisfied, she pressed the service button for the fourth time. A flight attendant hurried over and politely attended to Lisa’s needs. After receiving the pen and filling out the form, Lisa thought about what happened. “I felt the need to express it to a senior crew member on the plane because I hope this unpleasant thing would not happen to other people,” she expressed.

After some time, a senior male flight attendant apologized to Lisa. “He kept apologizing to me, and he kept going back and forth to find the unprofessional flight attendant,” Lisa said. “After a few minutes, he came up to me and said he told the manager about the incident, and he also discovered who ignored my service calls. He asked me how I wanted the situation to be handled.”

She emphasized at the end of her post, “If Cathay Pacific’s executives want to find out more details about this incident, I definitely welcome you to contact me!”

However, netizens felt Lisa probably acted snobbish on the flight to receive such treatment, or the crewmember disagreed with Lisa’s political stance. On this note, Lisa defended herself and said, “I am not in the wrong.”

Later on, Lisa also published a list of the flight attendants on her flight to point out the crewmembers that handled the incident. Yet, it made matters worse; she indirectly revealed the information of some of the workers, and people questioned how she obtained the list. As a result, Lisa received another round of scolding from netizens.

Speaking of complaints, patrons earlier complained about the small size of the abalones sold at Mat’s business. Lisa took the liberty of standing up for her boyfriend and responded, “Thank you for your feedback. When I have time, I’ll help you compare the prices at seafood shops to see if 88 HKD is too pricey! We will then reflect on it, thank you for your comments!”

Is Mat Yeung Planning for Marriage?