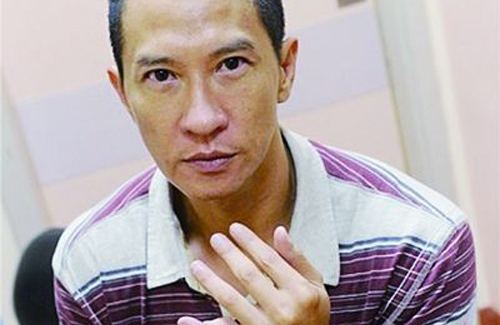 Nick Cheung (張家輝) trained day and night to get into shape for the boxing film Unbeatable <激戰>, and even revealed his hard-earned 6-pack figure in an exclusive photo shoot with JET magazine three months ago. Nick’s “chocolate abs” quickly became the talk of the town, but what remains hidden beneath that glorious physique?

The pressure of body-building had reportedly taken a great toll on Nick’s mental and physical health. Reports claimed that not only did Nick show signs of depression relapse, he and his actress wife, Esther Kwan (關詠荷), also had to sleep in separate rooms.

Before Nick accepted the offer to shoot Unbeatable, he kept a strict diet during the filming of thriller movie Nightfall <大追捕>. Having to lose weight so quickly in a short amount of time, Esther was worried about Nick’s health. When Nick decided to film Unbeatable, Esther reportedly “exploded” with anger. She wanted to bring Nick to a doctor, but Nick refused, afraid that medication would impact his muscle gain. Esther and Nick constantly argued.

Not wanting their daughter to hear their arguments, Esther told Nick to only return home after their daughter, Brittany, fell asleep. For over six months, Nick reportedly spent long nights at the film studios, and when he returned home, he would only sleep in the living room.

Reports also indicated that Esther and Nick avoided each other as much as possible. One night, the paparazzi caught Esther shopping in a pharmacy alone. Literally five minutes after returning home, Nick appeared and left with a friend.

The couple have also stopped appearing in functions together, and only Esther was seen taking their daughter to school.

Nick found the rumors hilarious, and clarified in a phone interview yesterday, “The only times when I do not sleep in the same bed with my wife is when I leave town for work, or like a few weeks ago when I took my daughter to Tokyo Disneyland. Other than that, we’ve never slept in separate rooms before. Also, I am not depressed. Unbeatable took in over a million HKD in advanced screenings. The box office is doing well. I feel great right now!”