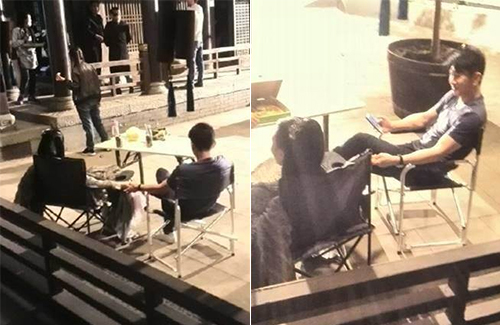 When Nicky Wu (吳奇隆) and Cecilia Liu (刘诗诗) tied the knot last March in Bali, the world has been on the edge of their seats, waiting for the big baby announcement. The couple have had their fair share of denying pregnancy rumors more than once, and it’s only a matter of time before they deny this one too.

Visiting each other on the set of their own respective shows isn’t something new for the Scarlet Heart <步步惊心> couple, but Nicky’s frequent visits to the set of Cecilia’s new television drama Lost Love in Times <醉玲珑> is making way for speculation.

According to the source of the rumor, Nicky has been visiting Cecilia more frequently than usual. In one paparazzi shot, the loving couple were seen holding each other’s hand during Cecilia’s break on set. Rumor has it that Cecilia plans to take one year off after completing Lost Love in Times, leading to the rumor that she is currently pregnant.

Many fans, however, doubted the rumor. They pointed out that Cecilia has many action scenes in Lost Love in Times, and they doubt she would do the show if she really was carrying a child.

Cecilia has also personally responded to the pregnancy speculation. During a set visit, Cecilia told the reporters that she has “no energy” for a baby at the moment, adding, “Let’s think about this some more after I’m done with the show.”