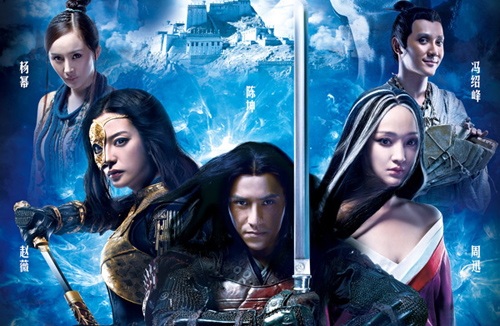 With its record-breaking release figures, Painted Skin II has sparked mixed comments from its debut audience. Some audience members commented that the movie’s tickets were difficult to buy. The craze about the film has spiraled out of control following its debut. One netizen even uploaded a picture showing that all sessions of the movie were fully sold out in one cinema, except the 11 PM show, which still had a few seats in the first row.

The most-anticipated scene of the movie is Zhou Xun’s (周迅) metamorphosis. Unfortunately, the scene in which she changed her “skin” only lasted for two minutes. At the film’s premiere, Zhou Xun said, “Although it always gave me a hard time to wear the special visual make-up, the filming process had been very exciting!” She added that during the lengthy moulding process she could not see or hear nothing. This isolated feeling allowed Zhou Xun to immerse into her character, who had suffered 500 years for love.

However, other critics were not as impressed by Painted Skin II. They criticized that the 3D filming effects were not evident, and the storyline was incomplete. “The sequel lags far behind its first installment.” Another netizen commented, “Without a good storyline, it does not matter how many stars and how wonderful the special effects are!” One senior film reviewer, even went so far as describing the movie as nothing but emptiness covered by a layer of “special-effects skin”!

While mixed remarks exploded on the Internet after the movie’s release, many people did praise Vicki Zhao (趙薇) for her acting skills and ghostly appearance onscreen. It is evitable for any film to be clear of negative reviews. The criticism for Painted Skin II may have stemmed from audiences’ overly high expectations of the film.