Cathay Pacific Airways shocked the public when the airline announced it laid off 5,300 Hong Kong employees while its subsidiary company of 35 years, Cathay Dragon, has immediately ceased operations. Many people felt great pity and regret, given that Cathay Dragon, formerly known as Dragonair, would now be history. 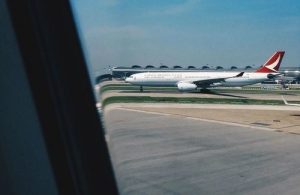 In response to this news, Pakho Chau (周柏豪) posted a photo of the Cathay Dragon aircraft on Instagram and wrote, “I can’t believe this photo that I took casually would now become history.”

He ended his post with “good luck” to encourage those who lost their jobs. Unexpectedly, he received a response from an alleged flight attendant who had served him on Cathay Dragon. The netizen shared that when Pakho was eating McDonald’s during his flight to Tokyo, the flight attendants received complaints from other passengers about the foul odor wafting from his meal. Since fried food tends to have a strong smell, the smell of his McDonald’s meal filled the entire confined cabin. Some passengers found the smell unbearable and questioned why he was allowed to bring food to eat onboard.

After the alleged flight attendant left that comment on Pakho’s post, he humorously apologized to the flight attendant. The star wrote, “Thank you for your hard work. I think this is the first time McDonald’s has ever received a complaint about their food being smelly. I think they have it worse than me.”

This response made a lot of people laugh, which sparked many other netizens to share their own funny experiences on public transportation. One person said that they were eating McDonald’s on a bus without air conditioning and also got yelled at, to which Pakho responded with a laughing emoticon.

He will star with Venus Wong in the new series.

Pakho does not feel anxious with the management changes at his record label, Voice Entertainment.