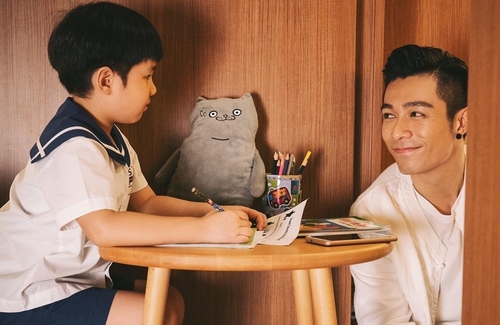 Recently, Pakho Chau (周柏豪) accepted a radio interview and discussed his new role as a father. Though the 35-year-old finds caring for his daughter more challenging than filming, he is thankful his daughter is not a difficult baby. With great experience as a first-time dad, it is no wonder the singer is already thinking about having another child. He joked that he wants to reward his wife, Stephanie Chu, for her hard work with another baby – hopefully, a son to accompany his daughter.

Though it is rumored that he gave Stephanie a Clear Water Bay mansion as a push present, Pakho denied it and said he bought the property last year, and it is now worth 40 million HKD. However, he admits he has the urge to shower his wife with gifts “since she doesn’t ask for much.”

He added, “I let her manage our finances because she’s good at math. When I need money, I just let her know. I will continue working hard after resting for a bit.”

With a new baby comes new responsibilities, and that includes choosing a name for the child. However, since Pakho’s daughter does not have a name yet, he will ask a Feng Shui master for advice since it’s an important decision. Equally as important is picking a date for a Cesarean section, which can bring good luck to the mom, according to Pakho. He generously shared his own experience of being in the operating room with his wife.

“Once I sat down, I started crying, so she had to comfort me so I wouldn’t scare the doctor,” Pakho recalled. “She said it was fine even though her stomach was opened. My heart ached for her. Women are really strong; I feel that men shouldn’t complain. I will do my best to do my part!”

He Enjoys Changing His Daughter’s Diaper

At home, Pakho tries to be as hands-on as possible. “I like to change her diaper because she doesn’t cry when I do it. Of course, I experienced her pooping all over the place, but I don’t think it’s nasty. Although it feels a little like the crab filling of a Shanghai dumpling, I know she’s the product of me. It feels very warm,” Pakho said.

He also said he misses her every day. “I want to quickly return home after work, and I’m not considering long work trips for the time being.”

Not only is Pakho growing in his personal life, but also his work life. His acting skills in the currently airing drama, Wonder Women <多功能老婆>, was praised by director Ella Chan Po-wah (陳寶華). He humbly said, “We started a group message in which Ella helped us get into our characters for better results.”

As for being nominated for three awards – Best Actor, Most Popular TV Male Character, and Most Popular TV Song – at the 2019 TVB Anniversary Awards, Pakho said he was more confident in the music category. “I don’t have confidence in winning the TV King crown. I am a new actor, and I have a lot of outstanding senior actors.”

He continued, “Many dramas this year are very interesting. I am very happy to have come across good scripts and songs. The awards are for the whole team and those who support me.”