As his father’s guarantor, he was forced to apply for bankruptcy given the huge debts owed.

Korean actor Park Bo Gum, who starred in Reply 1988 and Love in the Moonlight, seemed to have had a quick rise to fame. However, the good-natured actor had actually gone through a tough childhood, and even incurred a huge debt due to his father, which influenced his decision to join showbiz in order to pay off the debts.

With his clean, wholesome image, Bo Gum has become an advertisers’ darling, taking on ads for various products from beverages to fashion and even condoms.

As his mother passed away when he was in fourth grade, the family got into dire financial straits. Bo Gum started sending out his singing demos to agencies when he was 15.

In 2011, he officially debuted with a supporting role in the movie Blind which was followed by 2012’s Runway Cop and A Still Picture. He scored a breakthrough when his roles in 2014’s Wonderful Days and Nodame Cantabile snagged a Best New Male Artiste nomination at the KBS Drama Awards, while 2015’s Reply 1988 saw him win over many fans with his childlike innocence as Choi Taek, and he was nicknamed the “Nation’s Younger Brother.” He won a Best Actor award at 2016’s KBS Drama Awards for his role in period drama Love In the Moonlight.

Father’s Debts Made Him Bankrupt

When Bo Gum was 15 years old, he had been a guarantor for his father, who borrowed 300 million won to start a business. Due to the interest rates of personal moneylenders being much higher than banks, the sum owned had snowballed to 800 million won by 2014.

Unable to pay the sum, the actor applied for bankruptcy exemption from Seoul central district court and was declared bankrupt in 2016. Later, he reached a consensus with the creditor and several months later, the courts announced he was no longer under bankruptcy protection.

In a previous interview when he discussed about applying for bankruptcy, the actor revealed that he did not begrudge his father and confessed his rueful feelings instead. “To be honest I was really upset–I had always wanted to be a son my dad can rely on and feel proud of. I am really sorry towards my father,” Bo Gum said.

Bo Gum was enlisted in August 2020, and assigned to South Korea’s Naval Cultural Promotion Team. He will be discharged from the military in April 2022.

The countdown for Park Bo Gum’s return from military service has started! 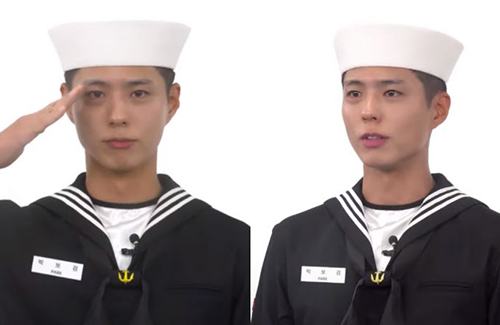