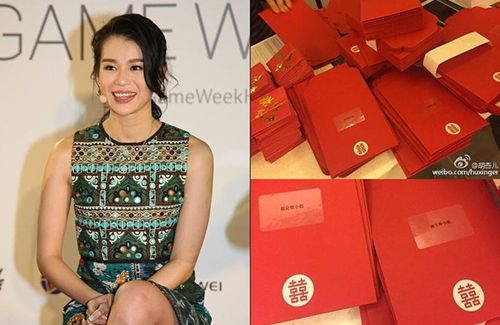 Myolie Wu (胡杏兒) will be getting married to her boyfriend of one year, Philip Lee (李乘德) on December 28. The former TVB actress has been spending the last few weeks wrapping up her wedding invites, which is kept inside a red envelope taped with the red string of fate, a thread that symbolizes marriage and unity.

At a recent public appearance, the 36-year-old revealed that she has invited over 50 tables of guests and has already sent out the invitations. She also made sure to give one to her former boyfriend, Bosco Wong (黃宗澤), who she still keeps in contact with. Asking if Philip had invited any of his ex girlfriends to the wedding, Myolie said, “I don’t know. Never bothered to ask. We will invite all friends.”

Myolie’s bridesmaids include close friends such as Elaine Yiu (姚子羚), Mandy Wong (黃智雯), Selena Li (李施嬅), her elementary school classmates, and her family members. Nancy Wu (胡定欣) is Myolie’s Maid of Honor, while Paisley Hu (胡蓓蔚) is the team leader of the wedding door games. There will be a total of 20 bridesmaids and groomsmen. Myolie said, “Each of them can have a partner!”

Philip is not unknown to the media prior to dating Myolie. He’s well-known for frequenting nightclubs, where he met many of his former girlfriends. It has been said that his personal Facebook account has nearly a hundred photos of Philip being in a nightclub.

Because of his frequent visits to nightclubs, the paparazzi often snap photos of Philip being surrounded by women, earning the “playboy” title from the media. Myolie has more than once defended Philip from these rumors, ensuring the media that he is 100 percent faithful to her.

However, it was reported that Philip, who was planning to invest in another night establishment PLAY, decided to drop out of the project last minute. Sources say that Philip did not want to harm Myolie’s image in any more controversial investments. A close friend of the couple also told the media that Philip, who is already 42 years old, wants to settle down for good, and focus on doing something that is less “playful.”