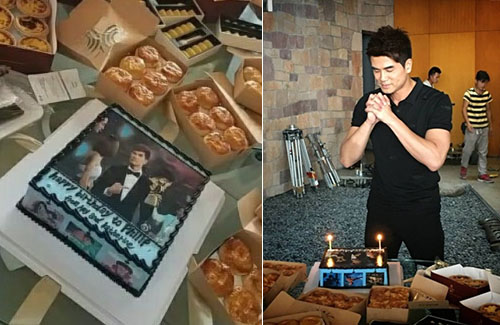 Philip Ng (伍允龍) celebrated his 40th birthday on a work day, but the action star was in the company of close friends.

On September 16, the A Fist Within Four Walls <城寨英雄> star celebrated his 40th birthday on set in Shenzhen. He uploaded a series of pictures from the set to social media and thanked the cast and crew for surprising him with the mini birthday party. The cast purchased many different dessert pastries and a custom-made cake that is printed with a picture of Philip.

“My friends here gave me a very happy surprise! So happy and touched!”

After finishing work in Shenzhen, Philip will return to Hong Kong next month to start on the TVB drama Brothers <兄弟>, which also stars Vincent Wong (王浩信).