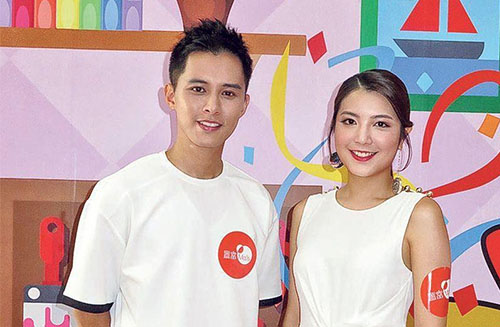 Matthew Ho (何廣沛) and Phoebe Sin (單文柔) were invited to an event in Ma On Shan, where they were asked to share their thoughts and knowledge about fashion and style. Phoebe shared that she used to have a more mature sense of style, but after becoming a host for a children’s television program, she simplified and downgraded her style for a more in-house image.

“I was really into weird fashion when I was studying overseas,” said Phoebe. “I’d like to wear really big hats, but it’s hard to wear something like that if you’re riding the MTR.” At the mention of boyfriend Ruco Chan (陳展鵬), Phoebe said they like to talk about fashion and exchange opinions. Mentioning that Ruco was criticized for his poor fashion sense when he wore an outdated cardigan to an event, Phoebe said, “Fashion is in the eye of the beholder. If you’re into a simpler style, you wouldn’t think a person wearing a complicated shirt would look pretty. It’s very subjective. As for his cardigan, I really think it brings out a different feeling. It’s a lot better than what he’s worn before, and it matches the event. I don’t know what shirt he was wearing. The things you’ve worn five years before may not be in style anymore.”

Currently filming the TVB drama Leaping Across the Lifeline <跳躍生命線> with Joe Ma (馬德鐘), Matthew Ho shared that he has been preparing to film a big action sequence involving a crashed tour bus. Matthew plays an emergency medical technician on the show.

The TVB star said he feels the intimidation of working alongside a big star like Joe. “That senior presence is amazing,” said Matthew. “Once he arrives on set, that pressure is on. We can’t slow down. We’ve gotten from working overtime to finishing before schedule.”