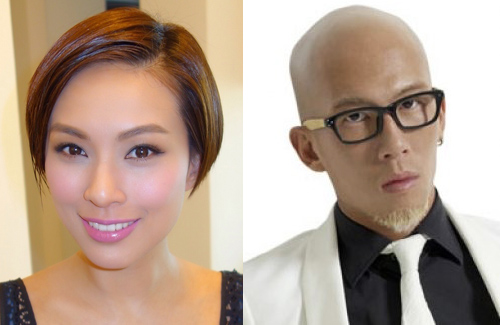 Eddie Pang (彭懷安), best known as a member of the now-disbanded Hong Kong Cantopop dance group EO2, has confirmed that he will marry longtime girlfriend, Come Home Love <愛·回家> star Queenie Chu (朱慧敏) next year. Eddie and Queenie’s relationship was brought to light after they were spotted eating lunch together in early 2012.

Yesterday, while promoting his upcoming film at a press conference, Eddie admitted that he and Queenie are planning to get married sometime in early 2016. He said, “It should be around the beginning of next year. As for the actual dates, we will definitely announce them soon.”

Queenie, who has been looking fuller recently, is rumored to be pregnant. In response, Eddie joked, “That’s actually her food baby! She has been working at her restaurant and also eating a lot, but don’t worry. Queenie and I will work hard to lose weight. We need to fit into our wedding attire.”

Although they are in the midst of planning their wedding, Eddie said he has not successfully proposed to Queenie yet. “She doesn’t think I’m romantic enough. Since her childhood, Queenie and her mother had always relied on each other, but her mother passed away around 10 years ago. I originally wanted to propose to Queenie in front of her mother’s grave, promising her that I will take care of her forever, but she thought it was a terrifying idea.”

On how Queenie knew about his wedding proposal beforehand, Eddie admitted that he unromantically told her about his plans to propose to her when they were fighting. “She was upset at me for not spending time with her, so I decided to tell her my plans. After all, I had already showed her my engagement ring. But she wasn’t satisfied with it, so now I have to come up with something else.”