Ray Lui Spotted Out on Date with Wife 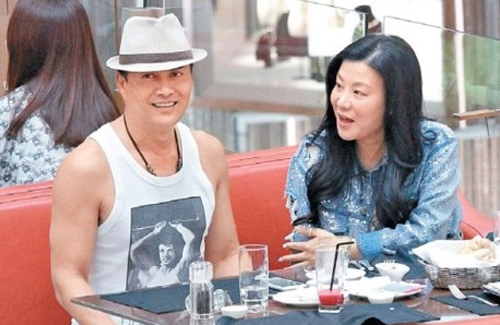 After two failed marriages with Kathy Chow (周海媚) and Cally Kwong (鄺美雲), Ray Lui (呂良偉) is finding lasting happiness in his third marriage with billionaire businesswoman Yang Xiaojuan (楊小娟). Wed for 14 years, the couple continues to go out on dates and shower each other with gestures of love in public.

Yang Xiaojun had supported and stayed by Ray’s side during his lowest times. In an earlier interview, Ray had described his current marriage with Yang Xiaojuan as his happiest. The couple often share their sweet affection towards one another.

With their son currently in military youth training in New York, the couple was recently spotted out on a date and enjoying brunch. Wearing a simple tank top and fedora, Ray was seen laughing heartily and chatting nonstop with his wife. The couple continued to hold hands and link arms as they departed the restaurant and went shopping for shoes. While descending on the escalator, Xiaojuan even put her arms lovingly on Ray’s shoulders, not minding the stares they received from other shoppers.

5 comments to Ray Lui Spotted Out on Date with Wife