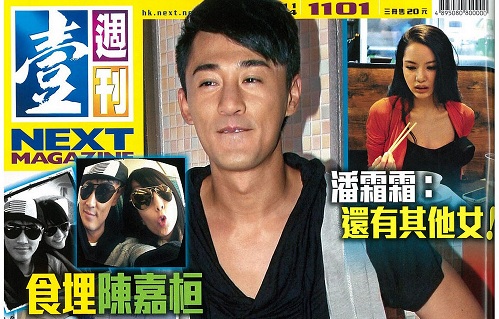 Since the circulation of Raymond Lam Fung’s bed photos, ex-girlfriend Mavis Pan Shuangshuang once again spoke to the press, revealing the reason for their break-up. Aside from third party, model Rose Chan Ka Woon, Mavis discovered “cheating” evidence in Raymond’s cell phone and there were even fourth and fifth parties in the relationship! Recently, video clips of Raymond inducing a woman to tears and intimate photos with Rose surfaced.

After collaborating on a music video together, Raymond secretly invited Rose to his apartment, Dynasty Court, for a “dog play date.”  Raymond was allegedly involved with Rose while dating Mavis.

Recently, video clips which appear to be Raymond’s secret cheating videos have been circulating. In the self-filmed video clip, a man’s voice clearly resembling Raymond’s voice told a woman, “Look at the camera.” Although her eyes were originally closed, the woman suddenly opened her eyes. Next, the man gently said, “Open your mouth.”

In another video clip, the man and woman appear to be engaged in “backdoor” sexual activities. Both the man and woman’s backs were to the camera. The woman’s hair was messy and the man ordered, “I cannot see your face.” However, the woman continued to cover her hands with her face.

Despite Rose’s continual denial that she was involved with Raymond, recent photos circulated in which Rose and Raymond appeared to be enjoying themselves together. In addition, the pair took iPhone “fish eye” photos which distorted their facial features for fun. From the angle of the photos, it was obvious the pair were hugging each other closely.

Allegedly, Raymond even invited Rose to his apartment, Dynasty Court, to allow their dogs to play together. While dating Mavis, Raymond also asked Mavis to his home to see his dog. According to an inside source, “Rose loves dogs. She owns a white poodle and often uploads photos of her dog on her blog. Sometimes when Rose appears at functions, she will also bring her poodle along. Raymond owns an Alaskan Husky, however he does not bring the dog outside often. When Raymond first got involved with Rose, he often asked her to bring her dog to his apartment and take dog photos together.”

On February 28th, Rose uploaded photos of her poodle on her blog, indicating that she took her dog outside for fun. Next Magazine noted that Rose’s photos were taken around the same time Raymond took photos of his Alaskan Husky at home. Sitting next to Raymond’s dog was a woman whose flowered dress was also captured in the photo. The flower print matched the outfit Rose wore in a photo taken with a friend in Taiwan in February.

Rose was selected by Raymond to film a music video in Taiwan. With Rose spending time at Raymond’s apartment, no wonder Mavis was so upset and said Raymond was not loyal in love. Last week, Mavis was in Hong Kong to try out different images for her upcoming pictorial book. Raymond was in Xiamen, China at the time. Often portrayed as having hurt and betrayed Raymond, Mavis countered, “Not only was there a third party, there were fourth and fifth parties too! I met the wrong person!” Distracting her sadness, Mavis turned to a tempting hot pot dinner. “In the past, Raymond and I had hot pot together too…”

During the hot pot dinner, Mavis noted, “I don’t remember when those photos [bed photos] were taken. It was unfortunate that these photos were used by other people. If I were the one who had released them, then I could have done so while we were still dating. There would be no need to incur my current negative image.” While speaking with Hong Kong reporters, Mavis said, “I felt I was hurt in the incident….”

Appearing as a guest at a Jipi Japa shoe function, Rose Chan insisted that she never went to Raymond’s house. Regarding the photos she took with Raymond, Rose said they were taken for memories after completing Raymond’s music video.

Rose indicated that her mentor, Sin Kwok Lam, was quite strict with her. Pointing out that she was only 18-years-old, Rose said she will focus on improving her martial arts, singing and acting career rather than date. Drawing clear boundaries with Raymond, Rose said, “After filming his music video, we have not seen nor remained in contact with each other.” Excerpt from Next Magazine #1101 and Orientaldaily

Jayne: Undeniably, Raymond and Rose Chan got along well. They seem to be thoroughly enjoying themselves in the photos they took for fun. Also, Rose has dimples, a feature which Raymond loves in a woman! It may have also been possible that they had dog play dates at Raymond’s house….

As for the anonymous sex videos that Next Magazine incorporated in the article, that tidbit was likely added for sensational effect. The videos sound like some anonymous couple and cannot be concretely linked to Raymond.