The drama, which talks about the founding of the Sui Dynasty in the late 500’s, stars Joe Chen (陳喬恩) as Dugu Qieluo and Chen Xiao (陈晓) as her husband, Emperor Wen. It is the second serial adaptation about the Dugu family after 2018’s The Legend of Dugu <独孤天下>, which included a more in-depth backstory of Dugu Qieluo and her sisters.

Queen Dugu sets itself apart from the previous adaptation, as it focuses more on Qieluo’s relationship with her husband as well as her significant contributions to the establishment of the Sui Dynasty. The show has emphasized that it is a “female-oriented” political drama, similar to how Nirvana in Fire <狼牙棒> is a political drama about scheming male characters.

And while both Joe Chen and Chen Xiao are popular actors with large fanbases, both of them have failed to bring good word-of-mouth ratings for Queen Dugu. 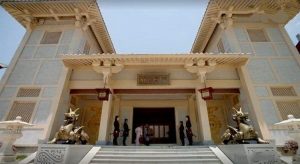 The show has been criticized for being outdated with unrealistic set pieces, making the show look less like a historical political drama and more of a low-budget romantic fantasy. Viewers were even more disappointed by the old-fashioned and clichéd script—in an ambush scene, Dugu Qieluo looked calm and collected like a wulin master. In episode five alone, there were two cliff-jumping scenes: the first victim was Dugu Qieluo, who falls off a cliff in a fight. The second victim was Dugu Qieluo’s sister-in-law, who takes a knife for her husband and falls off a cliff.

The storyline was getting predictable.

In another clichéd subplot, Dugu Qieluo makes the decision to leave her husband as she didn’t want to bring him down. She leaves him a letter and leaves, only to get herself in trouble requiring to be saved once again.

Queen Dugu also has many slow-motion scenes, making it appear more like an idol romantic series than a political drama.