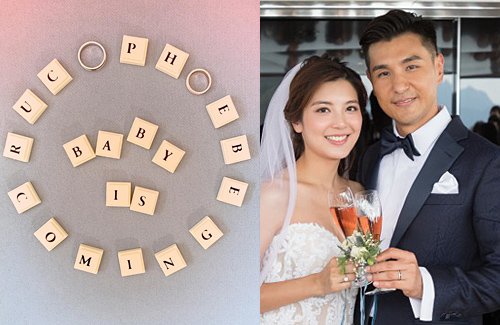 Last month, Ruco Chan (陳展鵬) and Phoebe Sin (單文柔) got married on a yacht and always said that they were ready to be parents. Fans didn’t have to wait long because the couple just released the good news that they’re expecting their first child.

The couple broke the news on their social media accounts. Ruco was first to announce the news, “Baby is Coming. 2018 has been an unforgettable year. I now have another identity! I look forward to your arrival!” Phoebe followed up with her post, “Looking forward to the arrival of piggy.”

As the news came shortly after the couple got married, many people are wondering if Ruco got married because of Phoebe’s pregnancy.

In an event that Ruco attended today, he responded, “A lot of friends asked if we got married because of the pregnancy or if we accomplished this within a month. You think we are machines where we can put something in and get something out? Children are the gift of God! Early last year, I did an interview, and said I wanted to get married. Thus, we started preparing . We found out about the good news while in England taking the wedding pictures. In following Chinese traditions, I was forced to keep it a secret.”

The baby is expected to be born around April or May of next year and the gender of the baby is not yet known. Ruco doesn’t have a preference for the baby’s gender but knows that Phoebe wants a boy to carry the family lineage.

As of now, Phoebe is three months pregnant and her belly is starting to show. When asked if Phoebe will give up her career to take care of the baby, Ruco will let Phoebe decide. He thinks Phoebe would like to continue to work especially since she has only worked in the industry for two years.