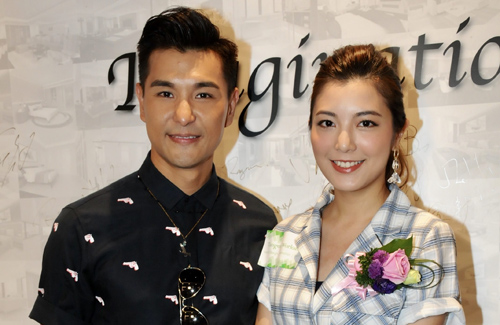 When Ruco Chan (陳展鵬) and Phoebe Sin’s (單文柔) relationship was exposed in 2017, fans reacted negatively and did not immediately embrace their romance. Not only did the 41-year-old actor’s popularity plummet, but Phoebe’s reputation also suffered. A variety of rumors were abound, with some accusing Phoebe was using Ruco to promote herself. After dating for more than a year, the public is finally starting to warm up to the couple. Ruco has also stated that he views Phoebe as a potential marriage partner.

Reflecting on their earlier dating days and the public’s reaction, Ruco said, “To me, it was not a big deal. The most important thing is the truth of the situation. I work in the entertainment industry, so I understand the audience and how things are. For a new person though, it was difficult for her to grasp and handle the situation. When something happens so suddenly and you can’t get a good handle on the situation, it would affect her tremendously. Take a child for example. When you give the child a negative signal, it would affect the child’s mentality and, ultimately, affect his or her growth. The entertainment industry is the same. False reports and allegations would leave a mark on the person. We were fortunate this time. In the end, the audience finally came around to understand the situation. This reduced the harm done to her.”

In addition to worrying about Phoebe, Ruco was also concerned about her family during the rough times of their initial relationship. He reflected, “Right when she joined the entertainment industry, something of this magnitude happens. Imagine how worried and afraid her family was? What she and I had to deal with was not just the accuracy of the allegations, but having to persuade her family to believe the truth.”

Fortunately, the couple was able to withstand through the storm. Not only are they still in a stable relationship, but their bond has also strengthened. Ruco expressed, “I believe in fate. This time, I fatefully met a simple-minded girl. She understands me. Because I am someone who keeps my feelings to myself, I am not someone who is straightforward and cannot clearly express myself. Not everyone can be accepting of this. Sometimes, I don’t even know how to balance it out. But she trusts me. This is a good foundation. A lot of people like to see fairy tales, but often overlook the middle part. Actually, every fairy tale’s romance must go through some hardships. Right now, we are focused on mutual consideration and understanding. Everything else can then be solved in a simple manner.”

25 comments to Ruco Chan is Protective Towards Phoebe Sin