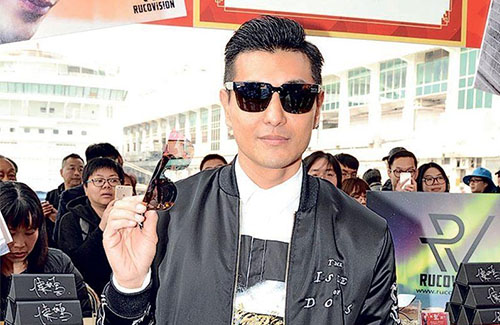 On the second day of Lunar New Year, Hong Kong TV King Ruco Chan (陳展鵬) will make another trip to Malaysia to greet his fans. According to the Meet & Greet’s promotional poster, the most expensive tickets are marked with a starting price of approximately HK$1,200, which even more expensive than some of the larger-scale fan meetings held by K-pop stars.

The expensive price was criticized by netizens and fans, but Ruco said it was all a misunderstanding. “If you read the poster carefully, you’ll know it’s not [that price] at all” he said, at an event for TVB held earlier this week. “But it’s fine. Take a closer look.”

Asking if his fans would have the opportunity to have closer interactions with him, Ruco said, “We’re still planning out how the fan meeting is going to play out. Our Malaysian friends have always been very supportive of our Hong Kong artistes. Because it’s around New Year’s, there could be a lot of people and crowd control would be more difficult.”

Earlier, Ruco and his girlfriend Phoebe Sin (單文柔) were spotted doing some volunteer work together. In regards to their “date”, Ruco clarified that veteran actress Susan Tse () was supposed to tag along, but she caught a cold and had to be absent.

As for upcoming Valentine’s Day, Ruco said he should be spending the day doing work. How about an earlier celebration? The TV King laughed and said, “If I want to celebrate it, we can celebrate it every day, not necessarily on Valentine’s Day.”

Sharon Chan Decides Not to Give Son a Flu Shot

Sharon Chan (陳敏之), who attended the same TVB event with Ruco, did not bring her 1-year-old son along as she does not want her son to get sick. As it is the peak of winter flu season, Sharon wants to avoid taking her son’s to places where it is too crowded. The influenza virus is much more transmissible in densely-populated areas like Hong Kong.

“When I leave the house, I would always carry some hand sanitizer along, to protect myself,” she said. “I don’t want to get my family sick.” Asking if she considered the flu shot for her son, she said the controversy surrounding the latest flu vaccine has led her to go against the idea. “Right now, it’s important to look after what you eat and general hygiene,” she said.

Although her husband was strongly against getting the flu shot, Sharon said she considered doing it secretly. “I even booked an appointment with the doctor, but I didn’t my son to get the side effects after the vaccine. My husband would also be furious, so I respect his decision.”