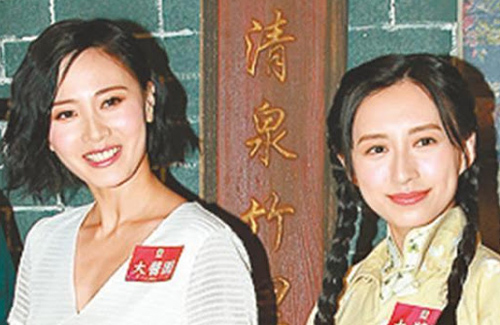 TVB drama The Great Soy Factory <大醬園> is currently in the final stages of filming. Since the start, the drama has been surrounded by unlucky events such as Rebecca Zhu (朱晨麗) suffering from a heat stroke and dislocating her shoulder while filming and Katy Kung (龔嘉欣) suffering from vertigo due to lack of rest. Now there are rumors of discord among the two actresses.

It started with Katy recently posting on her personal Facebook account, “Everyone is working hard and going through the same struggles. Don’t tell me that so and so is not feeling well, or that so and so has been working long hours and then ask me to help out. I’ve already helped so many times! When I’m not feeling well and sleep deprived, I still come to work. I’ve persevered for the past decade, if you’re afraid of hardships, then don’t become an actor.”

Katy has since deleted the post and there are two different stories circulating from the production team. One is that Katy is not happy with the scheduling and is being a diva and throwing a tantrum. She wanted to cut down on the time she spends waiting to shoot her scenes, and would request that the crew combine all of her scenes together causing other actors to have longer waiting times.

The other story is that Rebecca seems to have special treatment. If she had a late shift the night before, she would be late the next day causing long delays and wait times for other actors. There was once a scene involving many actors and Rebecca still showed up two hours late. Rebecca had also requested that her scenes be pushed to a later date so she can get some rest. Katy declined to accommodate and Rebecca was unhappy and threw a tantrum.

Media reached out to both actresses. Katy did not directly respond as to whether her post was directed to Rebecca, but stated that she did not want the situation to continue. Her work ethic has not changed for the past 10 years. Claiming she is innocent, Katy did not feel a need to comment.

As for Rebecca, she said, “Those who spread rumors are most likely those that are surrounded by them.” She emphasized that she was having a good time filming and that every cast and crew member go through the same hardships, so one must be empathetic and flexible to accommodate.

2 comments to Rumored Discord between Katy Kung and Rebecca Zhu