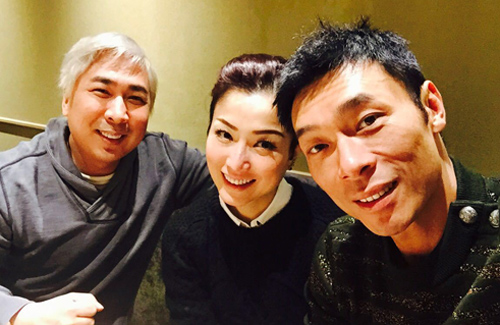 Sammi Cheng (鄭秀文) and Andy Hui (許志安) were in an on-again, off-again relationship for 24 years. In 2004, the couple shockingly announced that they had broken up. But love always finds a way; Sammi and Andy reconciled their differences in 2011 to the delight of many fans.

Reports claimed that the couple had secretly registered their marriage in Bali, Indonesia in November 2013. After Andy proposed seven times over the years, Sammi finally overcame her fear of marriage and accepted his proposal. Andy’s patience and love gave her courage to take this step in life. They also have a mutual consensus to adopt children one day.

Although the couple did not like to openly talk about their marriage, there were signs that they had already settled down. When Andy’s brother passed away in 2014, the couple sent a wreath to the funeral and signed as “younger brother and sister-in-law.” This further fueled the marriage rumors.

The couple recently had dinner with long-time friend, Hong Kong musician Clarence Hui (許愿). Clarence declared, “When I first met you, you were both newcomers. I have seen all your hard work throughout the years. Breaking up and reconciling, you each had your own moments to shine. When Sammi told me today: ‘You can call me Mrs. Hui’, I am truly happy for both of you. May you grow old together, hand-in-hand.”

5 comments to Sammi Cheng Finally Admits She is “Mrs. Hui”