Sammy Sum and Sisley Choi are Nothing More than Close Friends 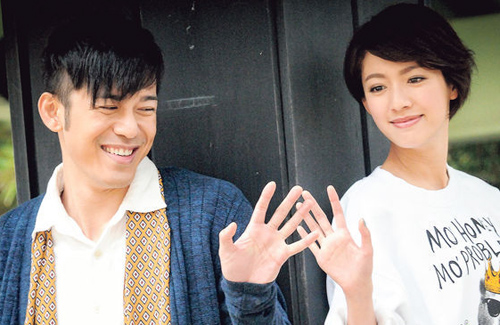 Sammy Sum (沈震軒) and Sisley Choi (蔡思貝) became a rumored item after collaborating in Young Charioteers <衝線>, a drama about childhood friends who share the same passion for cycling. Sammy and Sisley quickly clarified that they are nothing more than close friends, with Sisley calling Sammy as her older brother and mentor.

“I wasn’t expecting to have so many rumors,” said Sisley, who made her acting debut in the 2014 drama Overachievers <名門暗戰>. “My first rumor was with Sammy, and from then on, I became rumored with every other actor on set. It was perplexing.”

During the filming of Young Charioteers last year, Sisley reportedly flirted with most of the male actors on set, including Him Law (羅仲謙), Adrian Chau (周志文), and Alan Wan (溫家偉). “I don’t understand why I was rumored with Alan Wan [and Adrian Chau]. My character does not even have a relationship with them! However, we’re already good friends before filming. I don’t mind being rumored with Adrian Chau because he’s handsome, but Alan Wan? I’m not saying he’s not handsome, but he really isn’t my type!”

Sisley explained that prior to experiencing these rumors, she was once called off for looking too dark, serious, and arrogant. “I didn’t talk much then, but now people are saying that I’m flirty. It’s like whatever I do is wrong.”

In Young Charioteers, Sammy plays Sisley’s childhood friend who has unrequited love for her. Although Sisley chooses to be with Him Law in the end, Sammy is willing to stay by Sisley’s side to protect her.

Sammy admitted, “When we were filming, I felt [Sisley] was my little sister. Actually, none of the roles I’ve played had good endings. I always end up playing the guy who silently guards from behind. I actually find it really romantic.”

Sisley described Sammy as a close friend whom she can confide to, but their generation gap also makes Sisley see Sammy as her teacher.

“The nineties generation is very blessed, but because of that they also have to work harder than those born in the seventies or eighties,” said Sammy. “These kids are exposed to more things than us, so to succeed they have to work even more.”

“But the eighties generation are more experienced than us. They would tell us what to do and what not to do, because they’ve done it all from experience,” replied Sisley.