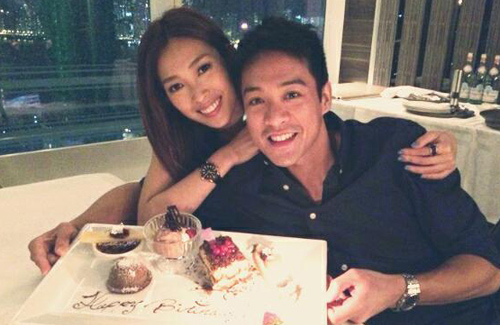 Miss Chinese International Sarah Song (宋熙年) and TVB actor Jason Chan (陳智燊) have been rumored to be dating three years ago, although the two never admitted their relationship. Last year, reports suggested that they had started cohabiting in Tseung Kwan O, to which they denied. However, the couple’s relationship has stabilized and they seem ready to go public.

On August 10, Sarah uploaded a photo of her 29th birthday dinner with Jason on Sina Weibo and wrote, “Thank you for another birthday. More wonderful birthdays ahead…but hopefully not wrinkles.” Sarah’s post was regarded as a public confirmation of her relationship with Jason.

Friends from the entertainment industry were quick to send their blessings as they saw the post. Samantha Ko (高海寧) referred to Sarah and Jason as a “lovely couple”, while Katy Kung (龔嘉欣) called them “elder brother and sister-in-law.” Angie Mak (麥雅緻) urged the couple to tie the knot and wrote, “Quickly get married! Don’t just talk about it.”

Reporters telephoned Sarah to ask if her post meant publicly announcing their relationship.

She laughed and expressed, “Thanks for all the blessings. It doesn’t really count as a deliberate announcement. We’ve been developing our relationship naturally throughout time, and my main purpose of uploading the photo was to share my joyous birthday.” When asked if the couple will perhaps tie the knot next year, Sarah said, “It won’t be that fast, and we’ll take things slowly. My current focus is work.”

Jason followed Sarah’s post and also shared an older photo from one of Sarah’s previous birthday celebrations together.