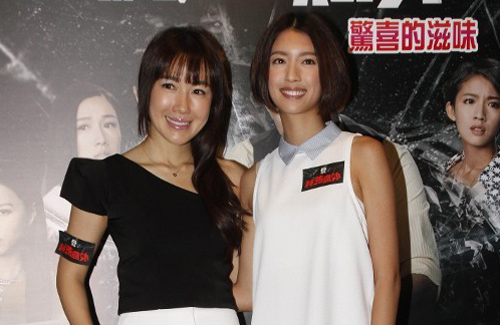 On the other hand, despite being in the industry for more than ten years, Selena was overshadowed by newcomer Sisley. Due to losing out on the lead role to Sisley, reports claimed that Selena’s jealousy sparked a rivalry between the two actresses. While attending a promotional event for the drama recently, Selena took the opportunity to refute the negative rumors and clarified that she did not have any ill feelings toward Sisley. Selena said, “I am only a guest star and my photo is already so big on the poster. It’s quite nice!”

With two years left in her TVB contract, Selena shared that she did not have any intentions of leaving the station. When asked whether she took offense on being cast in a supporting role, Selena explained, “I have never taken screen time into consideration when I accept a role. I only assess whether the role has potential for breakthroughs. It’s normal [to have differences in screen time]. They wouldn’t decrease my screen time because of Sisley.”

Producer Andy Chan (陳耀全), who was also present at the event, stressed that he did not favor any one artiste over another. “[Selena’s] character is very important. I had to find someone with acting quality to portray the role. She executed the role very well.”