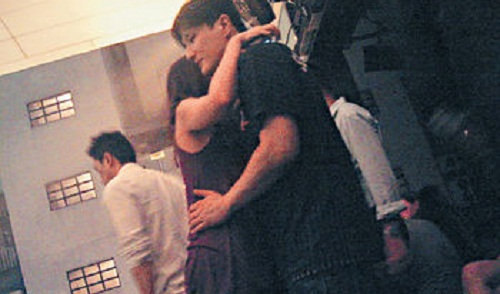 Since ending her four-year relationship with ex-boyfriend, Patrick Tang (鄧健泓), in 2009, Selena Li (李詩韻) had romantic rumors with TVB colleagues Kenneth Ma (馬國明), Kevin Cheng (鄭嘉穎), and Edwin Siu (蕭正楠) earlier.  However, the rumors turned out to be false as 30-year-old Selena professed her single status! When Selena discovered that 38-year-old Patrick may have secretly married 22-year-old Katy Kung (龔嘉欣) last year, Selena said jealously, “He’s advancing in age and it’s time to get married! I am still looking for a good man!”

Incited by her ex-flame’s marriage, Selena suddenly became a frequent patron of nightclubs. Despite busily filming The King Boxer <拳王> with Kevin Cheng last month, Selena went to nightclubs every Friday night. She wore mini-skirts during her “man hunting” trips. Selena was spotted kissing Ching Hung’s  (清洪)godson, Xuan Mo (巫翊鳴). On another occasion, Selena hugged Terence Yin (尹子維) closely to her chest. Earlier, reporters spotted Selena bringing a man to stay at her home overnight.  It was saddening to witness Selena’s [promiscuous behavior] as a result of her broken heart.

A Different Man Every Night

On June 3rd, reporters spotted Selena bringing home a man to stay overnight at her apartment. To avoid exposure, Selena attempted to lose the paparazzi. On June 17th, Selena wore a mini-skirt and sunglasses while appearing at the celebrity-studded Tazmania Ballroom in the Central district. The entire night, Selena had her eyes on Xuan Mo. Although Selena’s pool skills were not bad, she threw her body on the pool table and raised her behind to showcase her figure.  Captivated by Selena’s bold behavior, Xuan gazed at her intensely. The pair hugged and started dancing together. Xuan kissed her forcefully on the face and Selena did not resist his advances since she was eagerly looking for love.

On June 24th, Selena appeared at the Tazmania Ballroom again. Wearing a mini-skirt and revealing her black bra straps, Selena was “attached to the hip” with Terence Yin both inside and outside the venue. Selena often pressed her chest against Terence’s body and whispered in his ears. As Selena willingly offered herself, Terence of course accepted her gesture. However, since Selena was still looking for “Mr. Right,” she retained an ounce of awareness despite he imbibed state. She rushed outside to send a text message and appeared forlorn. Well-educated and possessing a good career, of course Selena understood [the terms of] “who was willing to be touched everywhere.” Jayne: It appears that Selena is still single. I don’t think bars or nightclubs are a good place to find a serious, long-term relationship though. More like a place for the noise to lose yourself, have a good time, and find short flings.