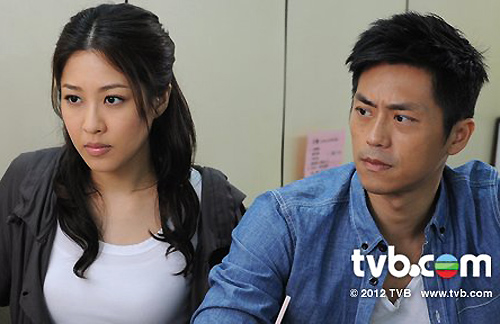 Since its premiere on December 18, Friendly Fire has been getting decent viewership and reviews. As compatible as main leads, Michael Tse (謝天華) and Tavia Yeung (楊怡), were as a couple, most viewers gushed that it was the supporting actors, Sammy Leung (森美) and Sharon Chan (陳敏之), who stole the show. Their surprisingly witty and humorous exchanges and interactions onscreen have put many smiles on viewers after a long and hard day of work.

In a recent interview, Sammy expressed that he is grateful for Sharon’s help throughout the entire filming duration of Friendly Fire. Sammy said that Sharon was like a mother to him, taking care of his everyday filming needs. She even helped wash his clothes!

“When she saw how dirty my set wardrobe was, she grabbed me with her to the dressing room and reminded the cleaning lady to wash my clothes. She really reminds me of my mom!” cried Sammy.

Sharon explained that she and Sammy became good friends after working in the film, A Dream Team <翻生奇兵>, together several years ago. Sharon said, “His true personality is very different from his onscreen personality. In public, he is very humorous and lively, but behind cameras, Sammy is someone who is very passive and shy. In our collaboration this time, I decided to be the active pursuer so I could transfer all my positive energy to him! He told me that he was diagnosed with depression several years ago, and I told him to give me a month’s time to cure him! Now he is much more cheerful! I think my treatment helped!”

Sammy warmed up quickly to Sharon’s “advances.” Sharon’s pursuits have even startled Sammy’s own wife! “My wife knows how I really am,” said Sammy. “She knows that I don’t have many close female friends. One day, I told her that I was going to buy some food for Sharon, and my wife immediately said, ‘Wa! You call her Sharon now? What great friends!’ She was not jealous, just a bit surprised!”

Sammy is best known for his hosting work on radio and television, and while he had worked on several acting projects in the past, he never took official acting lessons.

“I know I still have much room left for improvement. Filming in the studios at around 3 to 4 AM in the morning, and then seeing Michael Tse (謝天華) cry on cue, made me realize that I am actually a very bad actor.”

Sammy revealed that his nephew is now referring to him as “Po Tei Sir” – Sammy’s character in Friendly Fire – instead of Uncle Sammy. “At least no one calls me Sammy anymore! I guess I’ve passed the test.”