Striving to be a triple agent – Sharon Chan (陳敏之) juggles her time with being a mother, a businesswoman, and an actress. After giving birth to her son in 2016, Sharon insists on running her cookie business, which she hopes to launch across Asia.

Although now a mother and a wife, Sharon does not shy away from good filming opportunities, even if they require revealing appearances. In last year’s Heart and Greed <溏心風暴3>, Sharon played Michael Tong‘s (唐文龍) mistress and had quite a number of heated bed scenes. Similarly, she had several bed scenes in drama Come with Me <性在有情> opposite Eddie Cheung (張兆輝). 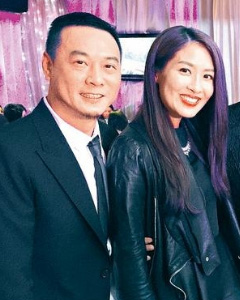 When asked if her husband is disapproving or gets jealous easily, Sharon said her is very understanding of the entertainment industry and her acting profession. However, as supportive as he is, Sharon’s husband would avoid watching the scenes, especially together with her.

Sharon added, “Now that I’m a wife and a mother, I’ll have to see if these intimate scenes are actually needed in the storyline, or if they are necessary for the character.”

Hoping for a Baby Girl?

As her son has turned one year old, Sharon started having thoughts about a second baby. Secretly hoping that her second child is a girl, Sharon admitted that these are only thoughts and she is not fully committed to having a second baby yet. Although her mother, her husband, and her in-laws all want a girl, Sharon said she will let things happen naturally.

Not being able to spend all her time with her son, Sharon expressed the importance of her son in her life. “Eddie is very important to me, so important – you can say that he’s my life! If a family member is not with him, I will never allow the nanny to take him out to play because I’ve heard of so many child abduction cases on the news. If something were to happen to my son, I wouldn’t want to live anymore. His life is very important to me. If there is a mishap because of a little mistake, I would go crazy!”