Sharon Chan Sacrifices Time with Son for “Heart of Greed 3” 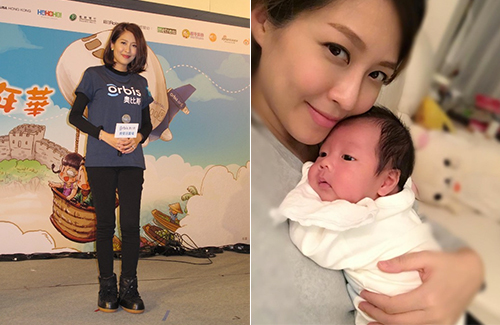 For the opportunity to star in TVB’s blockbuster drama Heart and Greed <溏心風暴3>, also known as Heart of Greed 3, Sharon Chan (陳敏之) ended up sacrificing her time with her two-month-old son.

On Sunday, Sharon attended a charity event for Orbis, a health organization that fights blindness in children. The 38-year-old actress said she enjoys taking care of people and has been sponsoring children even before she married husband William Lui (雷偉信) in 2014.

Busy with the filming for Heart and Greed, Sharon hasn’t had the opportunity to take care of her two-month-old son Eddie, nicknamed “Lui Winter Solstice”. Sharon said, “Whenever I have free time I’ll take my phone out and look at his pictures. He’s still drinking milk. When I go home I will feed him, so I can spend as much time with him as I can.”

Unlike Linda Chung (鍾嘉欣), who turned down Heart and Greed to take care of her daughter, Sharon decided to go for both. Balancing both family and career, Sharon only gets about two to three hours of sleep per night. “I haven’t filmed a drama in a year, and the opportunity to work in productions like Heart and Greed is rare and priceless. I really want to do it. I reached out to producer [Lau Ka-ho 劉家豪] for the opportunity, and I told him that I’ll keep fit and be prepared. The cast and crew are getting along so well. It gives me a warm feeling.”

After completing Heart and Greed, Sharon will take a break and bring her son, Eddie, overseas to a sunny island retreat. Asking if she would like to try for another child, Sharon said, “Let’s wait a few years. I would like a daughter.”