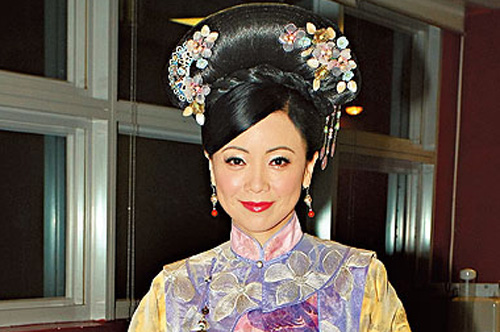 The competitive fire between TVB and City Telecom (CTI) continued to flame. Tempted by higher wages at CTI, many former TVB artists have signed with the new company. After offering Charmaine Sheh (佘詩曼) a filming fee of $130,000 HKD per episode, CTI reportedly offered Sheren Tang (鄧萃雯) an astronomical price of $150,000 HKD per episode! While Sheren and CTI were still negotiating, it was speculated that she will likely sign with them.

It was revealed that CTI will be producing 7 dramas, of which 3 dramas will be filmed this year: a police drama starring Felix Wong (黃日華), a drama depicting family struggles, and a female-oriented drama starring Sheren Tang, Maggie Cheung (張可頤), Bernice Liu (廖碧兒), Lawrence Ng (吳啟華) and Frankie Lam (林文龍). An insider revealed that the drama will feature Sheren as a strong businesswoman. The drama will be broadcast in Hong Kong as well as mainland China.

Sheren was currently filming War and Beauty 2 and appeared to be reserved in responding to questions regarding a possible collaboration with CTI.  “What? There are such rumors?” Asked if she was offered a filming fee of $150,000 HKD per episode, Sheren said, “Ha? I have to thank him! Ha Ha!” Regarding rumors that Ricky Wong will offer her a custom-tailor role in a new drama, Sheren replied, “Ha? He said that?” Excusing herself that she needed to enter the TVB studio to start filming, Sheren left.

A CTI Public Relations representative declared, “Sheren is still filming for TVB right now. We have not discussed all the details yet!” The representative did not clarify the filming fee CTI offered Sheren. “Ricky will be negotiating the price himself. It is a bit awkward to talk about it now! We do not wish to agitate the other television station too much. When things are finalized, we will announce it!”

TVB Deputy Director of External Affairs, Tsang Sing Ming (曾醒明), indicated that Sheren was still filming War and Beauty 2, thus her future filming arrangement was unclear. Mr. Tsang stated, “TVB values the spirit of the contract, whose intention is to ensure that artists will only film for us.” Mr. Tsang did not wish to comment on CTI’s policy of allowing its signed artists to film with any company they wish, further adding that they will continue to seek “new blood” to join TVB.

Jayne: Sheren will likely film for CTI, due to the good price and degree of freedom in the the contract. If CTI’s initial dramas turn out to be successes, more artists will likely join.