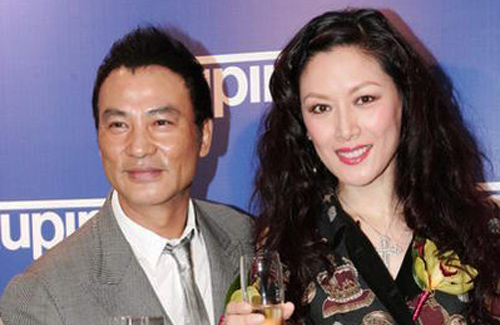 At an opening ceremony for a bedroom furniture store, 59-year-old Simon Yam (任達華) and 46-year-old QiQi (琦琦) spoke about their happy marriage. Together for over 17 years, the good-looking couple is still as close as ever.

“He gives me morning kisses,” revealed QiQi. However, when asked if Simon likes to kiss her in more areas than just the face, QiQi declined to answer the question and said, “My face will turn red!”

Simon revealed that he had injured his lower back while shooting for his new film SPL 2 <殺破狼II>. While filming a kidnapping scene, Simon was trapped in a confined space for over 10 hours and developed back pains. His doctor told him to forgo soft beds for now and sleep on hard surfaces.

Asked if she would help relieve Simon’s pain by massaging his lower back, QiQi said, “He doesn’t want me to. He has our daughter step on [his back] because her weight is more suitable.” Simon, QiQi, and their 9-year-old daughter Ella Yam (任晴佳) are very close. Sometimes, they would sleep in the same bed together.

To keep their marriage fresh, Simon revealed that he would sometimes buy small gifts for his wife. “They’re not always expensive ones. Sometimes they’re handy things. Sometimes they’re snacks. When I was in Thailand, I saw some oatmeal cookies and bought two packs back home for her.”