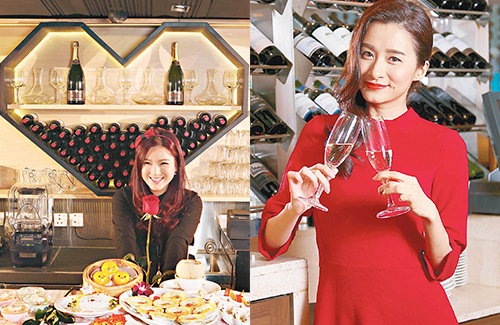 Though Christine spent the last few years as a single woman, she would always make time for herself on Valentine’s Day. February 13, popularly known as “Galentine’s Day”, is also a time for single women to celebrate their love for each other, and Christine proceeded to invite all her single gal friends to her dessert shop to chat and hang out.

“Let’s eat some dessert! It’ll make us all feel sweeter,” said Christine with a smile. “Today (February 13), the ladies party first. Tomorrow (February 14) we’ll get the men to hang out with us too!”

The Taiwanese-born actress, an alumni of the University of Calgary in Canada, said her most unforgettable Valentine’s Day was when she was still studying at the school. One year, Christine became the student who received the most flowers and chocolates from her classmates. However, not wanting to waste the gifts, she ended up giving most of them away.

But even so, Christine said no one was interested in asking her out. “I was kind of ugly then, with braces and didn’t smile much. My classmates all called me the ice queen.”

Christine enjoys a single life, but when asked about her ideal type, Christine smiled and said, “I like someone who can be my friend, who can joke with me, is filial and loving. He doesn’t need to buy me expensive stuff. Once, my ex-boyfriend brought me a hot drink when I was too busy to do so, and that immediately warmed my heart.”

Jess Sum broke up with her boyfriend of three years last July. The Executioner <刀下留人> star said she can now understand what it means to be a strong career woman, and hopes to start a training course that can teach young ladies how to find their confidence again.

“I want to start some cosmetology courses and teach girls how to be beautiful. I want to build their confidence so it’ll be easier for them to meet potential partners!”

When asked what she would normally do on Valentine’s Day, Jess said, “I’m the practical girlfriend. I don’t make cookies or bake cakes. I rarely do that. Usually, I observe what he normally wears and give him something that I know he’ll need.”

As this year would be her first year as a single woman after a long time, Jess said she invited her close female friends to her themed party on Valentine’s Day. But despite having went through a breakup, Jess strongly believes in fate, and she is looking forward to meeting her future half in the years to come.