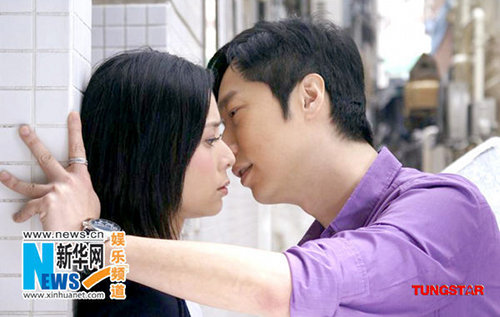 The filming for TVB series, “Seven Days’ Separation” (隔難七日情) officially started yesterday. Steven Ma Chun Wai and Sonija Kwok Sin Lei star as a pair of lovers. After Steven saved Sonija’s life, he taught her how to become a swindler. The two collaborate to swindle the wealthy and use the acquired money to assist the poor.

Over the course of his career, Steven said that his role in “Seven Days’ Separation”  was the most flirtatious character he has played. Steven and Sonija will share a kissing scene in the series. One scene spoke of Steven kissing Koni Lui Wai Yee passionately, while intentionally angering Sonija. The pair exclaimed, “The scene is extremely hot!” Sonija and Steven also praised the overall high quality of the script for “Seven Days’ Separation.”

How did Steven feel about the passionate scenes shared with his two co-stars? “Since I know Sonija well, it is not awkward to film the kissing scene. However, Koni is very tall. I am afraid I will not look good standing next to her!”

In one scene, Steven caught Sonija following him on the street, resulting in a close face-to-face shot. “I have filmed many scenes where our faces are positioned very closely next to each other. We have known each other for many years and are good friends, so we are not embarrassed.”

Steven said, “I have to praise Sonija for her hard work. In one scene, she had to film a suicide scene on the rooftop of a thirty-one story tall building. Despite the wirework, if there were any safety oversights, Sonija would have fallen down into the streets below. All the spectators were afraid for her, but she insisted on standing in position to finish the scene. She was very brave. Even a man may not have been able to do it!” Although Sonija was frightened during the filming of that scene, she was motivated by Steven and the entire crew’s support.

Over the years, Steven grew to value the bonds he shared with other people more. He treasured the chance to work with Sonija in “Seven Days Separation” and hoped to achieve good chemistry. “In the past, I was quite shy. Lately, my personality has changed and I hope to broaden myself. I started a personal blog. Chatting with my fans online and seeing my friends’ support, I realize that this world is very big and there is goodwill to be found everywhere. Broadening my horizons made me happier.”

Jayne: I still think that Sonija needs the right co-star to bring her into character. Perhaps her friendship with Steven will result in greater sparks onscreen. Koni Lui seems to be everywhere these days: in many TVB series and even more promotional functions!