Gambling kingpin Stanley Ho (何鴻燊) turned 98-years-old on November 25, and he spent it at the hospital with his second, third, and fourth wives and their children. As a man with 17 kids and 12 grandchildren – three of whom were born this year, one could only imagine how packed Stanley’s hospital room was on his birthday. His daughter from his second marriage, Josie Ho (何超仪), shared, “Just now, there were too many people up there. My dad was a little exhausted, so he is asleep now.”

However, Stanley’s offsprings from his first wife, the late Clementina Leitão Ho, were absent. Of the four kids Stanley had with Clementina, only his two daughters Angela Ho (何超贤) and Deborah Ho (何超雄) are still alive. Although they are both in Hong Kong these days, they were a no-show. Similarly, his granddaughters from his late daughter and late son, Ringo Siu (萧玟铮), Faye Ho (何家华), and Sarah Ho (何家文), all work in Hong Kong, but they did not pay Stanley a visit either.

Even so, Stanley has plenty of company. The casino tycoon has five kids with his second wife, Lucina Azul née Laam, and gave her the biggest share of the family business. However, his third and fourth wives, Ina Chan (陳婉珍) and Angela Leong (梁安琪), are speculated to be fighting for more money by increasing their headcount.

If that’s the case, fourth wife, Anglea, might be in the leading, since Ina only welcomed one grandchild this year while Angela had two grandchildren. Moreover, Angela’s son Mario Ho (何猷君) gave Stanley a grandson – Stanley’s first grandchild that could carry on the family name. 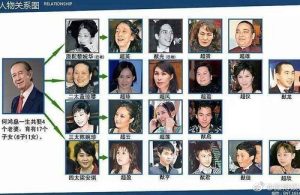