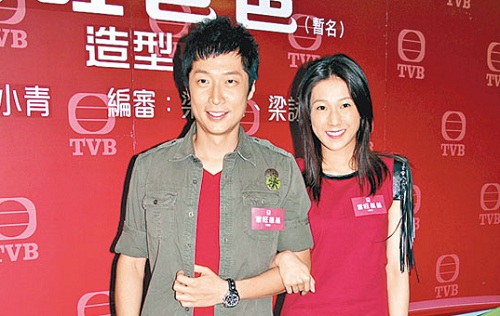 Steven Ma (馬浚偉), Linda Chung (鍾嘉欣), Samantha Ko (高海寧) and other cast members were at a costume fitting for upcoming TVB drama, Lucky Father <當旺爸爸>, debuting their red hot looks. The most eye-catching person out of the trio was Samantha Ko, who was dressed in a  tank top and hot shorts. Her “skin” exposure was way higher than Linda who only revealed her toned arms.

Steven revealed that he would be acting as a filming assistant (PA) in the drama and would tragically be treated as a sandbag. Asked whether he had drawn some experiences from Amigo Chui (崔建邦), Steven exploded into bouts of laughter and said, “I do know that it is tough being a PA in TVB but I feel that it will be one good experience.”

Although this was the fifth time that Steven was collaborating with Linda, Steven insisted that it wasn’t boring and that he still possessed  “feel.” Steven added, “Linda is a good girl!” When the reporter noted that Linda was dry, Steven replied, “No, I don’t feel so! You mean she’s still single?!”

As for Linda who will be acting as a strong policewoman for the very first time, she expressed that she wasn’t afraid of stirring up rumors with Steven, “I am not afraid of rumors with most of the male TVB artistes!” Linda, however, declined to comment on her love life.