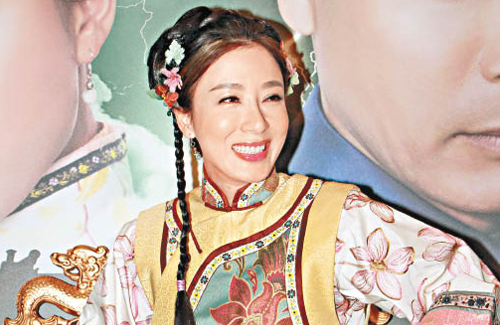 TVB’s big stars have left the station in recent years. With her contract due to expire in three days, Tavia Yeung (楊怡) reportedly attempted to negotiate a massive increase in her salary if she were to remain at the station.

Getting married to Him Law (羅仲謙) in England last week, Tavia has returned to Hong Kong and resumed her work. At a promotional event for The Last Healer in Forbidden City <末代御醫>, Tavia was teased by coworkers for “eloping”.

Tavia laughed and said she is still not used to being called Mrs. Law. Tavia smiled, “Thank you! I don’t know how to respond – I’m still not used to it. We’ll have the wedding banquet planned for the end of the year. I don’t want things to be too rushed. I’ll have to find bridesmaids but nothing has been settled yet.”

Initially, it was rumored that Tavia will not be renewing her TVB contract in order to concentrate on her personal life. However, seeing that TVB has been lacking quality actresses since the departure of Myolie Wu (胡杏兒) and Fala Chen (陳法拉) in recent years, Tavia saw this as an opportunity to prove her worth. It was speculated that Tavia demanded her salary to be doubled during negotiations.

While management executives were unhappy with Tavia’s secret marriage to Him, TVB desperately tried to get Tavia to stay by adding incentives in her contract. With Producer Mui Siu Ching (梅小青) returning next month, TVB plans to create a Hong Kong and Mainland collaboration to boost Tavia’s popularity in China.

Tavia expressed, “If I were to renew my contract, I hope it goes smoothly. My relationship with the company is like that of a couple – I hope to reach an understanding.”