Mat Yeung (楊明) is back to topping headlines for all the wrong reasons. On Saturday, August 8, Mat crashed his car into a side curb, prompting authorities to the scene. He was intoxicated and declined to receive a breathalyzer exam, which led to his arrest. Paparazzi photographed the actor looking inebriated and being lifted into a police car by two policemen. Currently out on bail, Mat will have to report back to the police in early September.

In a brief interview with TVB’s Scoop <東張西望>, he did not mention whether or not the crash was stemmed from drunk driving. He said he was feeling very lethargic at the time due to the lack of sleep. He was on his way to his studio to study a script before the accident happened. After the crash, he “blacked out” and couldn’t do what the police were asking him to do. 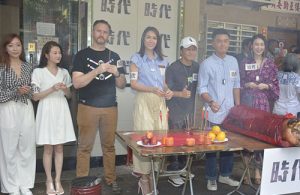 Unfortunately, that wasn’t Mat’s first vehicle crash incident. The 39-year-old’s first brush with the law happened in 2005, when he was arrested for DUI in Jordan. He was sentenced to pay a fine and his license was suspended for a year. In 2006, he was arrested for a drunken attack on a security guard. While he was on probation, he had another drunken episode of breaking items in a convenience store. He was sentenced to 150 hours of community service.

Debuting in 1999 after graduating the TVB artiste training class, Mat has been in the entertainment industry for over 20 years. His classmates included Raymond Lam (林峯) and Tavia Yeung (楊怡), and like them, TVB had intended to promote Mat as their next big idol star. Mat had a bright future, but the events that occurred in 2005 and 2006 significantly held Mat’s career back a few years.

Hopeful in Mat’s future, then-TVB executive Virginia Lok (樂易玲), who managed the artiste department, announced that she would be renewing Mat’s contract. In 2007, Mat returned to TVB’s artiste training class, the first TVB artiste in history to take the class two times. Mat showed progress and was determined to restart in a clean slate. After a few years of portraying supporting roles, he hit big with 2015’s Momentary Lapse of Reason <收規華>. In 2017, he won the TVB Anniversary Award for Most Improved Male Artiste for his performance in 2017’s My Dearly Sinful Mind <心理追兇Mind Hunter>.

In the years following My Dearly Sinful Mind, Mat was trained to be a lead star. He was the second male lead in the 2018 anniversary drama Fist Fight <兄弟>, and was the first male lead in 2018’s My Commissioned Lover <婚姻合伙人>. On-lie Game <迷網>, which ended last week, was Mat’s second drama as first lead. 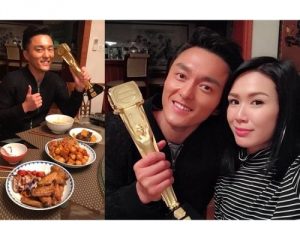 Typed casted as a policeman, Mat was also casted to play a cop in the film Era and the upcoming film directed by Danny Lee. Mat was also hired to do promotional work for the Hong Kong Police Force. However, with these new developments, it is likely that Mat’s career will be put on hold. When asked if Mat’s role would be replaced, Danny said he was not doing interviews.

Now back on hiatus, reporters are saying that Mat is “in hiding” at his girlfriend’s home. His girlfriend, Lisa Ch’ng (莊思明), is well-known for her wealthy background, as her father owns many real estate and jewelry businesses in Malaysia.