“The Journey of Flower” Heats Up Finale with Hinted Bed Scene 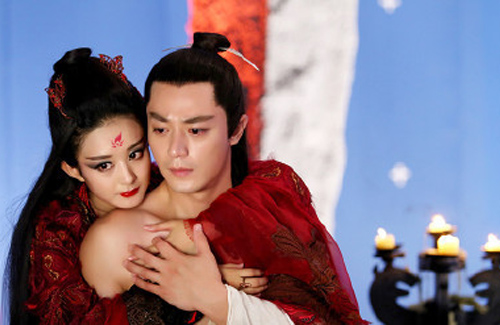 Ever since it began airing in June, the fantasy-wuxia drama, The Journey of Flower <花千骨>, has enjoyed soaring popularity. With its big finale scheduled for broadcast next week, fans are looking forward to female lead Zhao Liying’s (趙麗穎) portrayal of a beautiful demoness, as well as suggested intimate scenes between her and male lead Wallace Huo (霍建華).

The Journey of Flower tells of how Hua Qiangu (Zhao Liying) becomes the sole disciple of immortal Bai Zihua (Wallace Huo) and gradually falls in love with him. Although romance is strictly forbidden between master and disciple, Qiangu persists in her silent devotion to him, leading to a sadomasochistic relationship. When her master becomes poisoned, Qiangu is willing to risk her own life to rescue him, even feeding him her blood, stealing mythical tools, and going so far as to be expelled from her sect and be banished into the wild.

In The Journey of Flower’s latest preview, Qiangu is transformed into a beautiful demoness, undergoing a dramatic change in both wardrobe and personality. Now dressed entirely in sultry red, Qiangu is seen brazenly embracing Zihua from behind. Other released pictures show her chaining her master to a stone slab and lying on the same bed as him. As expected, fans are excited to see Zhao Liying’s 180-degree turn and are busy discussing whether or not love will prevail for Qiangu and Zihua in the end.

Originally scheduled for a 54-episode run, The Journey of Flower has proven so popular that the drama has been extended for another four episodes. Online traffic for the drama has surpassed 15.2 billion views on the video website Iqiyi, and the highest television rating for a single episode broke 3 percent. The Journey of Flower’s finale will air on September 7, and its broadcast time will be taken over the following week by the highly anticipated Cloud in the Song <大漢情緣之雲中歌>.